Two women reflect on working in the Lawton foundry 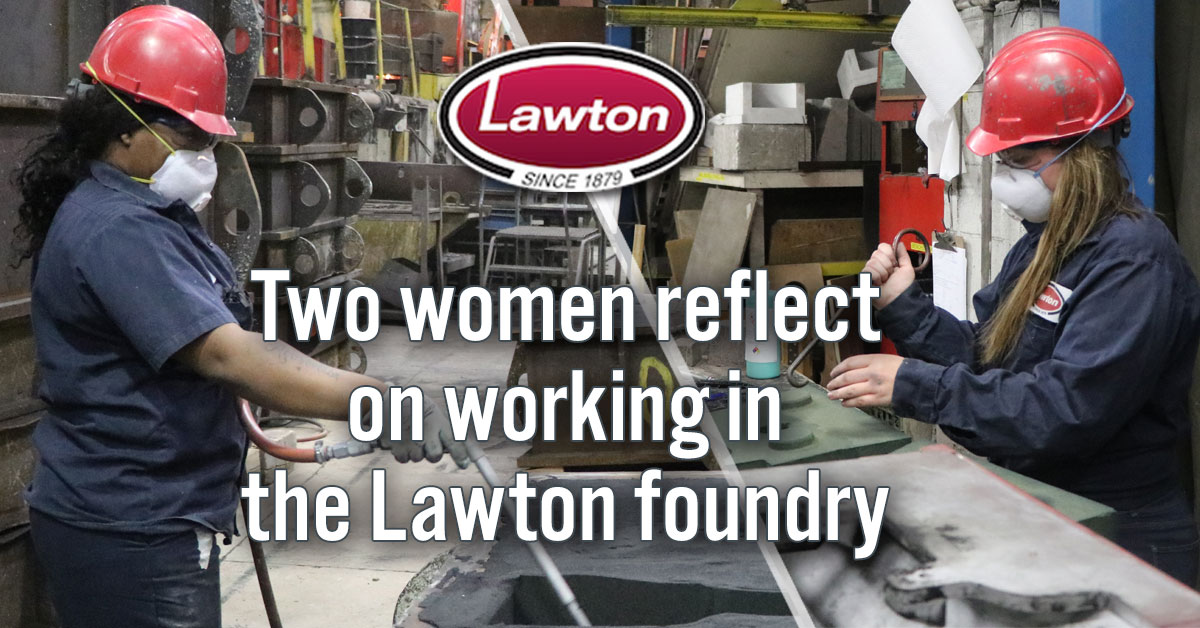 For much of its long history, the metalcasting industry has been dominated by men. This has also been the case at Lawton – until recently. Now we have two strong women working in the foundry. We recently sat down with them to learn about their remarkable experiences at Lawton.

First, meet Dani. She is 21 years old and has been with Lawton for three months. Before working at Lawton, she attended school for a year but found that she preferred more hands-on work. This led her to become a firefighter. Although she now works in the core room at Lawton, she continues to serve as a volunteer firefighter in her spare time.

“I’m really attracted to things on fire, I guess,” she chuckles.

Next, meet Angelica. She is 31 and has been with Lawton for two months. She works on the mold floor. Outside of work, her hobby is being a mother to her beautiful kids. Angelica has always worked in the trades and feels empowered to represent women in male-dominated environments. Before coming to Lawton, she was a welder. She expressed that she, too, enjoys a job that fits her hands-on learning style.

When it comes to being the only women in the foundry, Dani says, “To be honest, I think the men are scared of us. They were afraid to talk to me for the first three weeks until Angie showed up.”

It’s definitely a new experience for the men in the Lawton foundry to work alongside females. However, Dani and Angelica have been quickly accepted in this environment.

Dani explains: “The first time I ever called in, I was here probably 45 days, and I was really feeling sick. I came back the next day, and the guys said, ‘You’re never allowed to leave again!’ Everyone was wondering where I was, and if I was OK.”

According to Angelica, the younger men in the foundry say, “‘We’re cool with the (women). We like that they work here,” and “they miss you when you’re not here.” Receiving a reaction like that really shows how far society has come.

However, there are still some challenges that women face when working in predominantly male roles. Dani and Angelica spoke on this as well.

“I feel like they treat us like everybody else, but sometimes they watch us a little bit more. I’ve been asking to run the crane since I started,” explains Dani. “The first time I asked, they said ‘You’re too short. You don’t want to swing chains all day.’ I told them, ‘I play with firehoses and wear an extra 150 lbs. of gear for fun’ as a volunteer firefighter.”

Angelica agrees, adding, “Some of them kind of underestimate us.”

For these women, the key to overcoming these challenges has been continuously demonstrating that they can do the work just as well, if not better than, their male counterparts.

Additionally, both Dani and Angelica believe that by bringing more strong, hardworking, capable women into the foundry, these preconceived notions can be broken for good. They are pioneering space for women in Lawton’s foundry and need more women and men to join them.

The women also talked a lot about the things they really like about Lawton. Angelica says, “It’s a good company. I like the fact that we get to meet with the owner. That’s pretty cool. At some companies you work for, you don’t even have a clue who the CEO is. You just know your supervisor and maybe the general manager.”

“He comes around a lot. More than I expected,” adds Dani.

Dani also spoke about her experience coming to Lawton without any prior knowledge of a foundry, and how she was allowed to be hands-on right away.

“I feel like they roped you in right away. They get to know how you learn, and some of them show you stuff, and you’ll be like ‘OK, that doesn’t make sense.’ Then someone else shows you a different way, and you figure it out.”

“I started off in the cleaning room. I shadowed Jesús for the first day. But after three hours, he had me working on the piece right next to him.”

Dani also describes how Lawton has been very accommodating, making sure she enjoys what she’s doing. Referring back to her experience in the cleaning room, she explains, “I didn’t have the patience to work on one piece for three days. I couldn’t do it.”

This role was not a good fit for Dani. When she expressed that, she was given the opportunity to move to the core room, where she works now. She really enjoys this new role. She discovered that the time she spent working in the cleaning room has given her added awareness of the needs of her coworkers. She knows that the cleaning process can be long and difficult. That’s why she says, “I do a little bit more on my end to try to make their job a bit easier.”

There are many jobs within the foundry. That gives workers opportunities to learn many new skills, discover their strengths, and apply what they’ve learned in other parts of the foundry process.

Finally, the women spoke about how many of their coworkers really enhance the experience of working at Lawton. “For the most part, everyone is really nice,” explains Angelica. “I really don’t mind working with all guys because you can say anything to them, and they won’t get mad or offended.” She feels feel free to joke around with everybody, which really makes her workday fun.

Dani adds, “There’s definitely a bunch of different personalities here. Steve and I were cracking up at each other… I think the first week I worked here, right after they moved me to the core room, I was sitting down tying my shoe. Steve walked over to me and said, ‘Sitting on the job already?’ Literally twenty minutes later he was sitting over on the flask with some paperwork, and I said, ‘Sitting down on the job already?’ Since then we’ve just gone back and forth. He’s a cool guy.”

Dani says her coworkers also helped her celebrate a recent milestone in her life: “I celebrated my 21st birthday here, so that night half of the guys from the foundry said, ‘Let’s go out!’ Then we went to Anduzzi’s for my birthday.”

Dani and Angelica are pioneering the way for women in the foundry at Lawton. The imperfections are all part of the continuous improvement process.

We really want to encourage more women to join Lawton – where the future of iron casting truly is “Fe male.”