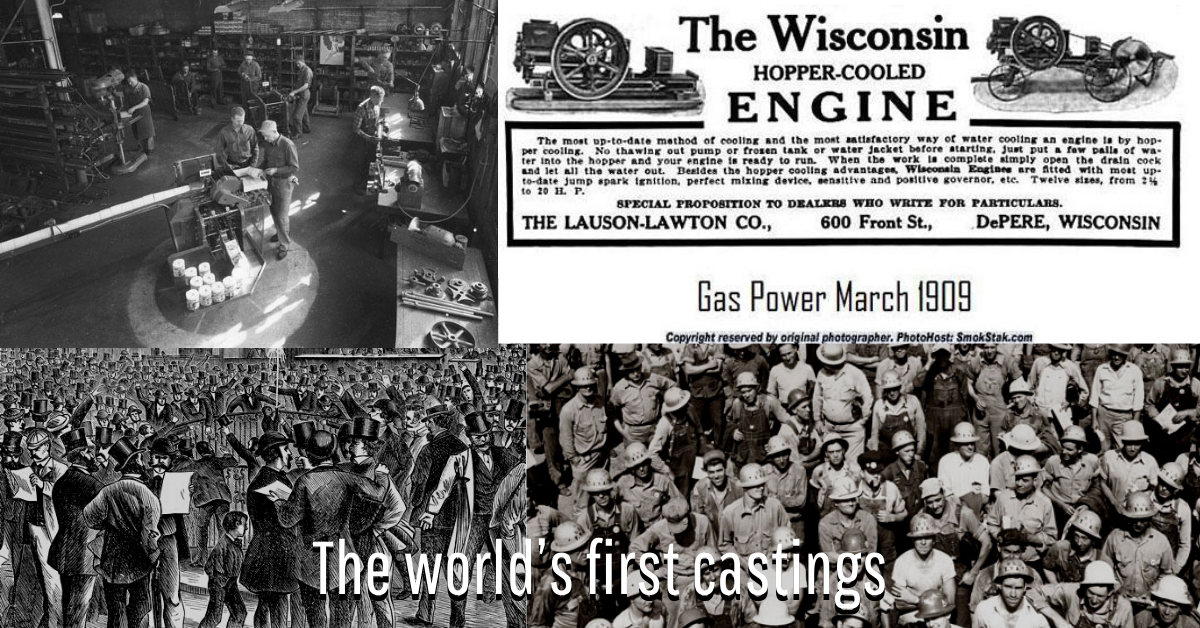 Some historians believe that iron casting began in ancient China as early as 6000 BCE while others believe that only copper and bronze castings were being made at this time. However, evidence provided by archeologists contradicts both beliefs. Discovered by archeologists in what was then known as Mesopotamia, the earliest uncovered example of a cast component is a copper frog that dates to 3200 BCE. Although iron and other metals had been discovered, it was not until centuries later that they could be melted and poured into a mold, such as a casting.

Archeologists believe that iron was discovered by the Hittites of ancient Egypt somewhere between 5000 and 3000 BCE. During this time, they hammered or pounded the metal to create tools and weapons. They found and extracted it from meteorites and used the ore to make spearheads, tools, and other trinkets. Between 2000 BCE and 1200 BCE, the Hittites developed a process for smelting the iron – heating its ore to purify it – expanding its usability. For centuries, the production of iron remained a closely-held secret of the Hittite people until roughly 1000 BCE when Chinese metallurgists discovered the superiority and workability of iron.

Some of the earliest examples of iron casting in ancient China are the four statues that stand outside of the Zhongyue Temple in Dengfeng. These statues were cast in approximately 1024 BCE. Before this, Chinese metallurgists worked with bronze and copper to create cast components, which were largely used in the country’s agricultural industry. It was revolutionized when the iron plow was invented. It made turning over the soil much easier for farmers.

One of the biggest impacts that China had on the evolution of iron casting occurred in 645 BCE when Chinese metallurgists began using sand molding. In this process, sand is tightly packed around an object, creating a mold. Then molten metal is poured into the mold to create a metal casting. The advantage of this process is the large variety of shapes and sizes that can be easily molded. The disadvantages are the unavoidability of defects and the fact that this process is quite labor intensive. This is the earliest known use of this process and represents China’s significant contribution to the history of iron casting.

The invention of the blast furnace

Another Chinese innovation was the blast furnace. It is used to smelt industrial metals, usually pig iron, a low-quality, brittle form of iron with high carbon content. It must be refined before it can be used to make steel. The term blast refers to the hot combustion air that is forced into the lower part of the furnace through pipes called tuyeres as fuel is supplied from the top.

The oldest blast furnaces discovered by archaeologists date back to the Han Dynasty of China in the 1st century BCE. Blast furnace usage did not expand to Europe until the 1100s. Sweden was the first to adopt the blast furnace, followed by France and Belgium in the 1300s, and England in 1491.

Additionally, in the 1400s, iron casting was introduced into Europe. The earliest evidence of cast products in Europe is a cast iron pipe used to transport water at the Dillenberg Castle in Germany. It was cast in 1455. Soon after this, in Burgundy, France, and England, cast iron was also used to make cannons during the Reformation of the 16th century.

In 1619, the first ironworks was established in North America by the Virginia Company of London. It was named Falling Creek Ironworks and was located near the James River. The colonists chose this location not only because of nearby ore deposits but also because it provided easy access to water for power and for shipping-related needs. The surviving written records indicate that this facility was able to produce some iron. But historians believe that full production was never achieved.

In 1642, Saugus Iron Works, America’s first iron foundry, was established near Lynn, Massachusetts. This was also the location where the first American iron casting, the Saugus pot, was made. Saugus Iron Works is now a national historic site, because of its landmark contribution to the manufacturing industry and the American industrial revolution.

Between 1700 and 1750, Britain relied heavily on cast iron imports from Sweden, because it could not expand its capacity fast enough to meet the growing demand for cast iron. This was prior to Britain’s industrial revolution. At that time, the iron manufacturing industry consisted of small, localized production facilities that had to be located close to the resources they needed, such as water, limestone and charcoal. That’s because there were limited resources for transporting raw materials and finished goods.

At this time, furnaces were small, which meant that their production capacity was very limited. Although Britain had abundant iron ore reserves, the iron that could be produced from it was brittle pig iron of low quality with many impurities, which were caused by charcoal-fueled blast furnaces.

As a result, cast iron’s usability was very limited. Most of the demand was for wrought iron, which was pig iron after its impurities were hammered out. But this took a long time to do, and imported wrought iron was less expensive. As a result, British iron at this time was only used for cheap items such as nails. However, iron would soon become the cornerstone of industrialization for the British economy, and by 1800, its leading export.

Iron’s great impact on Britain can be attributed to a flurry of innovations that were introduced during the 1700s. The first of these occurred in 1709 when Abraham Darby became the first man to smelt iron with coke instead of charcoal in a coke-fired furnace. Coke is a solid fuel that is created by heating coal in the absence of air and is a key element in the history of iron casting.

Coke was much cheaper and more efficient than charcoal. With the introduction of coke, it became possible and lucrative to use larger furnaces, which enabled larger-scale production. Charcoal was too weak to support a heavy charge of iron in large quantities, but coke was much stronger. Although the challenge of brittle iron had not yet been solved, Darby’s innovation had a big impact on the industry and inspired many other advancements.

The next innovation in the iron casting history was the steam engine. It was invented in 1712 by an Englishman named Thomas Newcomen. At this time, the steam engine was primarily used to pump water out of coal mines. Coal was a key part of the iron casting process, so this invention was integral to the industry and to the industrialization of England.

James Watt’s breakthrough happened when he realized that the design of the steam engine wasted a great deal of energy because it repeatedly cooled and re-heated the cylinder. Watt introduced a design enhancement, the separate condenser, which avoided this waste of energy and radically improved the power, efficiency and cost-effectiveness of steam engines.

Eventually, Watt adapted his engine to revolutionize transportation, which had been a major limiting factor for growth within the iron manufacturing industry. Material transportation was finally made efficient and more economical than ever.

The invention of the rolling technique

In 1783, Henry Cort developed two methods for extracting impurities from iron, turning it from pig iron to wrought iron, and allowing large-scale production of non-brittle iron.

Pig iron is a term used to describe the crude and brittle iron that comes directly from the blast furnace. In 1783, Cort patented grooved rollers that allowed iron bars to be made more quickly with a more economic process he called the rolling technique. Previously used methods consisted of hammering or cutting strips from a rolled plate.

In 1784, Cort patented the puddling process, which consisted of stirring molten pig iron on the bed of a furnace in which fire and hot gases swirling above the metal provide heat. This prevented the metal from coming in contact with the fuel. The circulating gases enabled the removal of carbon from the iron.

As the iron was decarbonized by air, it became thicker and balls of “puddled” iron could be removed from the more liquid impurities that remained in the furnace. Puddled iron, like wrought iron, was tougher and more malleable than pig iron and could be hammered and finished with the grooved rollers that Cort had invented. The rollers helped to squeeze out impurities. Additionally, by forming the iron into bars, the metal became easier to use for the creation of finished goods.

Cort’s contributions to the industry allowed large-scale production of cast iron products because it no longer took so much time and manpower to rid the pig iron of its impurities.

Between 1793 and 1815, due to increased demand from the military, British iron production quadrupled. The sizes of blast furnaces increased, and Britain finally had production capabilities that could meet demand.

However, in 1815, the War of 1812 ended, ushering in a period of peace. With the war’s end came the decline of both the price and demand for iron. However, Britain had become the largest producer of ironworks in all of Europe. In addition, its economy and way of life were totally reshaped and revolutionized by innovations in iron casting.

A PDF of slides demonstrating the history of metal casting, created by a professor a foundry technology class