The history of Lean – part 4 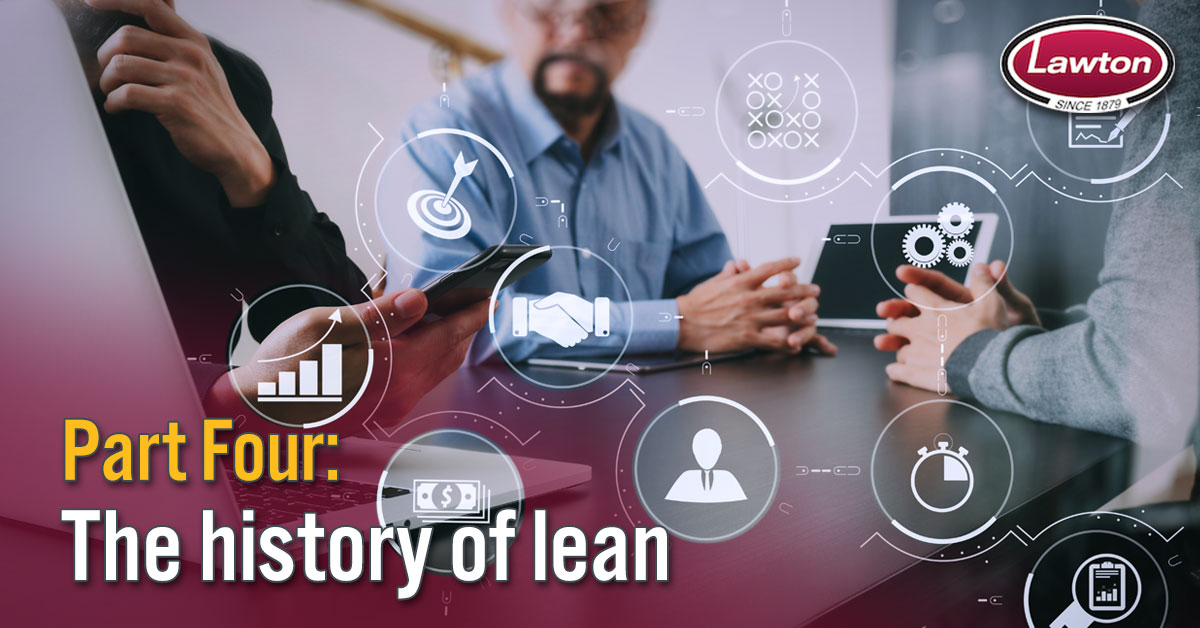 During the 20th century, the concept of Lean became a worldwide phenomenon from an unlikely source: a small Japanese loom manufacturer that would become one of the world’s most well-known and respected auto manufacturers: Toyota.

Through the Toyota Production System (TPS), the Japanese automaker molded ideas for making improvements into the concept of lean. Toyota was inspired by Ford, who was inspired by Frederick Taylor and Thomas Edison. Though Toyota is arguably the most influential contributor to the history and the present state of Lean, without inspiration from its predecessors, the Toyota Production System would not have been possible.

From modest roots, a manufacturing revolution

Sakichi Toyoda always an innovator, even at the young age of 15. He would read all the newspapers and magazines he could get his hands on, trying to learn about the world and how he could make an impact on it. In the late 1880s, when Toyoda was in his early 20s, he became interested in the hand looms used by local farm families. He wanted to find a way to improve their efficiency, seeing just how many people could benefit from innovation like this.

By the fall of 1890, Toyoda had developed his first successful invention. He called it the Toyoda wooden hand loom. It was patented in 1891 when he was only 24 years old. Two years later he opened his first small factory, but he had to shut it down after a year.

Refusing to give up, Toyoda went to live with his uncle so that he would have a place to stay and time to work on what was most important to him: his inventions. Doing this brought him great success, and by 1894, he had started a new company known as Toyoda’s Loom Works, Ltd., which pioneered many innovations.

One of them was the power loom. Developed in 1896, the Toyoda power loom was the first in Japan built from steel and wood, and was powered by steam. It was also equipped with an innovative weft auto-stop mechanism. The machine was a great success. It was relatively inexpensive, and it greatly increased productivity and quality. He spent the following years making improvements to the power loom. During this time, the success of Toyoda multiplied.

In 1910, Toyoda resigned from Toyoda’s Loom Works, Ltd., and set out on an observation trip to the United States and Europe. He hoped to start fresh with new ideas. It was on this trip that Toyoda met Ford and observed his process, planting the seeds for what Toyota would become. The trip inspired his final invention: the automatic loom, and the opening of a brand-new company named Toyoda Automatic Loom Works, Ltd., which would later become the Toyota Industries Corporation.

From looms to automobiles

Sakichi Toyoda sadly passed away in 1930. His legacy and company passed to his son, Kiichiro Toyoda. Soon everyone would know Toyota.

Kiichiro Toyoda was mesmerized by cars. So, in 1936, he decided to use his father’s company to start manufacturing automobiles. He knew he wanted to honor his father and keep the name of his new venture as Toyoda, but he needed a new logo to represent the company’s shift into automobiles. He decided that a great way to generate publicity for the company would be to hold a contest where people could submit new logo designs for it. Over 27,000 people entered the contest! However, one stuck out over the rest. It was a design that consisted of the word “Toyota” — no “d” — depicted artistically in the Japanese katakana alphabet.

Kiichiro liked it because Toyota, in Japanese, is written with eight brush strokes while Toyoda takes 10. Eight is a lucky number that represents luck and prosperity in Japanese culture, and Kiichiro wanted this to emanate throughout his business. Additionally, because the company had begun exporting heavily into the U.S., they wanted a name that also resonated with other languages. Company leadership believed that “Toyota” rolled off the tongue a lot easier than “Toyoda,” so this design was selected.

Ohno and Shingo drive the evolution of Lean

Toyota’s Lean journey really took off with the involvement of Taiichi Ohno and Shigeo Shingo.

Ohno had worked for Toyoda Automatic Loom Company before World War II. At that time, he made connections with Sakichi Toyoda, and this got him noticed by Kiichiro Toyoda. In 1943, Ohno became a production engineer at the Toyota automobile company. He worked as a shop-floor supervisor in the engine manufacturing shop of the plant for a while. However, because of his innovative ideas, he soon moved up through the ranks, becoming a company executive.

Through the use of Lean concepts, American innovators like Ford and Taylor had played a strong role in the Allied victory in the war. Seeing this, Japanese innovators, especially Toyoda, were interested in implementing these practices in everyday manufacturing. Ohno was the man for the job.

During the post-war years, the company transitioned from a conglomerate that still included the original loom business to having a sole focus on the auto industry. Ohno was promoted to machine shop manager. Under his watch and with his ideas, waste elimination and value-creating concepts were developed and implemented.

Much like Frank and Lillian Gilbreth, the human side of manufacturing was especially important to Ohno, who transferred increasing amounts of authority and control directly to workers on the shop floor.

In 1950, Toyota implemented quality circles in which groups of employees would gather to problem solve and discuss ways to improve the company’s production process. With the leadership of Ohno and Shingo, these quality circles led to the development of the famous Toyota Production System (TPS). Continuous improvement in quality, technology, company culture, productivity, safety, and innovation were the core of TPS. They believed that continual, small improvements would add up to major benefits such as faster delivery, lower costs and greater customer satisfaction.

“Kaizen, or continuous improvement, is the hallmark of the Toyota Production System. The primary objectives are to identify and eliminate “Muda,” or waste in all areas, including the production process. “Kaizen” also strives to ensure quality and safety. Its key elements emphasize making a task simpler and easier to perform, re-engineering processes to accommodate the physical demands on team members, increasing the speed and efficiency of the work process, maintaining a safe work environment, and constantly improving the product quality.”

In the early 1950s, Ohno saw a talk from Dr. W. Edwards Deming on statistical quality control, which demonstrated that improving quality can reduce cost. Toyota embraced these concepts and embedded them into the Toyota Production System (TPS). This resulted in Toyota winning the Deming Prize for Quality in 1965.

The preliminary design of TPS was heavily inspired by Ford’s assembly line. However, it was soon clear to the Toyota team that Ford’s methods had some shortcomings, particularly with regards to the treatment of employees, and its inability to accommodate product variety. With the innovative minds of Ohno and Shingo, they were able to adapt Ford’s methods to fit their production and the culture of labor unions that was prevalent in post-war Japan.

The concept of just-in-time manufacturing was also key to TPS because they believed that managing inventory played a central role in increasing production line efficiency. Ohno and Shingo made continuous improvements to TPS through the years through pull systems, Kanban, and by implementing many other Lean processes.

Ohno, in the 1930s, had been told that it took nine Japanese workers to do the same work as one American worker. Whether this was true or not, this motivated him to find ways to eliminate waste. It was this way of thinking that first inspired the idea for TPS.


By the early 1970s, the rest of the world was beginning to notice Japan’s success, and managers assembled for the first study missions to Japan to see TPS in action. Soon after, Norman Bodek and Robert Hall published some of the first books in English describing aspects of TPS. By the mid-1980s, several U.S. companies were actively trying these “new” concepts.

The term “Lean” was first coined by John Krafcik in his MIT master’s thesis on Toyota, and then popularized by James Womack and Daniel Jones in the two books that would finally spread a wider knowledge of TPS: The Machine That Changed the World in 1990 (written with Daniel Roos) and Lean Thinking in 1996. The latter described the core attributes of Lean as:

By the 1980s some American manufacturers, such as Omark Industries, General Electric and Kawasaki (at its Lincoln, Nebraska factory) were achieving success with TPS.

Those books, as well as organizations such as the Association for Manufacturing Excellence (AME) and the Lean Enterprise Institute, drove a widespread acceptance of Lean as a path to productivity and profitability. By the year 2000, Lean methods were moving out of manufacturing and into office and administrative environments.

The continued success of Toyota during the last two decades has created an enormous demand for greater knowledge about Lean thinking, and now many books, articles, courses, and publications are available to those who are eager to learn.

Today Lean methodologies are being adapted to serve logistics and distribution retail, healthcare, construction, maintenance, the administrative side of the business, and even government.

Wherever there is waste, there is room for Lean. We encourage all businesses to adopt Lean concepts to offer the best to their customers as Lawton strives to do every day through our continuous improvement culture.