Miracle League is a home run for Lawton employees 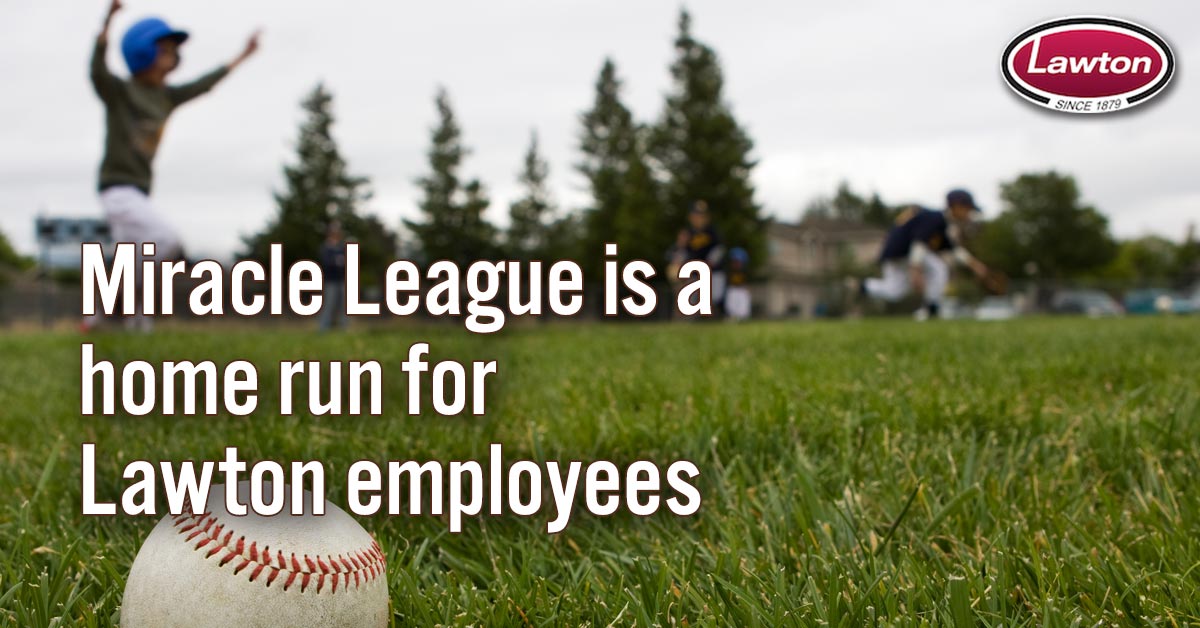 Miracle League is an organization that gives children ages four to 19 with cognitive or physical disabilities the opportunity to play baseball. Several Lawton employees who have volunteered to help the Fox Valley Miracle League say the experience is a home run.

Miracle League began in Georgia in 1998 when Rockdale Youth Baseball Association’s coach Eddie Bagwell invited a seven-year-old named Michael who used a wheelchair to play on his team. The next year, he invited other differently-abled children to join the team as well, and the league began that year with a total of 35 players on four teams.

When the league began, it was decided that:

In order to make the league possible, accessible and safe, community members and corporations came together to design, fund and construct a specially-designed field with cushioned surfaces, wheelchair-accessible dugouts and restrooms, concessions and picnic pavilions for families.

The first Miracle League complex was completed in April of 2000. On opening day, the Miracle League rosters had grown to over 120 players. In the very first game they played in the new complex, Nicholas Slade, a player who had been in a coma just a week before, threw out the first ball.

Ashley Anderson, senior accountant at The C.A. Lawton Co., has been volunteering for The Miracle League of the Fox Valley for seven seasons. She was a buddy her first season and has been a coach for the past six seasons. Ashley explained how it’s really “amazing watching the kids grow from year to year. I came in with pretty much a brand-new team. One of my players wouldn’t even leave the dugout during my first year. Now he walks out there; he encourages people to cheer for him. He hits the ball right over the fence. He’s really come a long way.”

She explains that Miracle League gives the parents a chance to sit back and watch their kids, which is not something the families often get the chance to do.

“I wanted to volunteer my time because this is an amazing cause,” Ashley emphasizes. “Seeing how much they grow has really kept me there. I moved to Madison for a year, and I wasn’t going to come back. They were all disappointed, but when I moved back and they got their draft letters with my name on them, I got a whole bunch of emails from parents saying how happy they were I was coming back.” Ashley knows how much this means to the parents and the kids, and that’s why Miracle League is so important to her.

Keith Heimann, machine shop supervisor at Lawton, recently began volunteering with The Miracle League of the Fox Valley. This year was his first season volunteering as a buddy. He got involved through Ashley. After coaching youth sports while his son and daughter were young, Keith said this seemed like a perfect opportunity: “My player this year, it was actually his last year that he was eligible. He was a lot of fun to be around.”

“We were playing catch and he was having trouble catching the ball. I joked around with him and said, ‘Do you have a hole in that glove?’ The next week when he came back for the next game, he comes running up to me saying, ‘See, I got the hole fixed!’ It was like our own little joke.”

Keith also explained why he believes more people should volunteer for Miracle League. “When you see their faces when they cross home plate, you just get goosebumps every time because you can see how much they love it.”

Being a part of this organization just brings joy to everyone involved. If you want to be a part of such an amazing cause, click this link to volunteer for the 2020 season.