The history of Lean – part 3 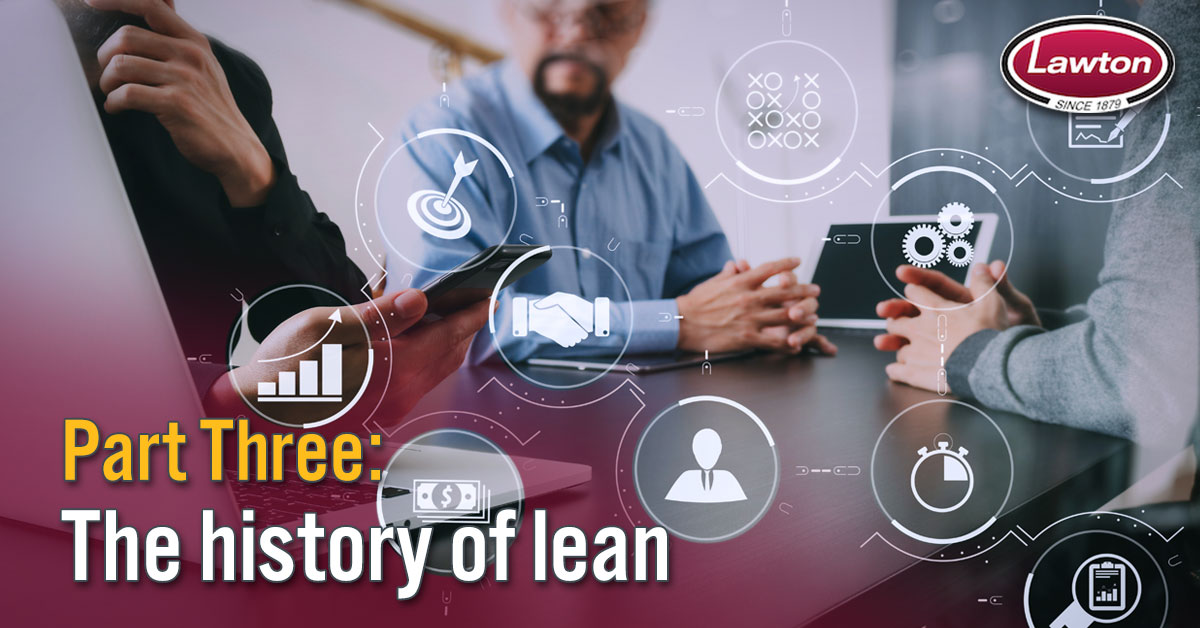 The 1900s were a pivotal time in the history of Lean. It was during this era that the Gilbreths introduced the idea of process analysis and process mapping. Frederick W. Taylor introduced the concept of scientific management to further streamline manufacturing processes. And Henry Ford built upon these ideas to mass produce affordable automobiles.

Although the term “Lean” had not yet been coined at the turn of the 20th century, eliminating waste had evolved from an approach practiced by a few key innovators to a widespread movement when inventors such as Marc Isambard Brunel and Eli Terry successfully executed standardized mass production of interchangeable parts in the 1800s.

The next great leap in Lean history came in the early 1900s when a female innovator made her mark. Lillian Gilbreth was a multi-faceted woman. She was a psychologist, industrial engineer, educator, businesswoman, consultant and a pioneer in the application of psychology to time and motion studies. In fact, in 1915, Gilbreth became one of the first female engineers to earn a Ph.D. She was also the first ever industrial or organizational psychologist. These accomplishments made her a pioneer in the world of business psychology.

Lillian married her husband, Frank, in 1904. Until his death in 1924, they worked together, studying the effects of human factors on the efficiency of production processes. Lillian studied the motivations of workers and the effects of employees’ attitudes on the outcome of processes. Frank’s focus was more on the logistics side, and how the reduction of human motion could increase the efficiency of assembly processes.

After observing construction and factory workers, Frank and Lillian developed charts or maps depicting the sequences of events required to finish a product or yield an outcome. These diagrams included elements such as cycle time, inventory and equipment information. Through the use of these highly visual outlines, the Gilbreths were able to distinguish between waste and value-adding activities. Today, this practice is known as process mapping, process charting or value stream mapping.

Although Toyota is commonly credited for the development of this process, true credit belongs to Lillian and Frank Gilbreth. They are also credited for originating the concept of eliminating waste, the primary tenet of Lean manufacturing. Although innovators throughout our Lean history were focused on efficiency and process improvement, it was the Gilbreths who first defined these activities as eliminating waste, which would later come to define Lean.

As experts in efficiency, Lillian and Frank used their knowledge to open a consulting firm. Through their consulting work, Lillian revolutionized the science of management and Frank taught the use of process charts – which revolutionized the design of production processes. The Gilbreths were the first to begin molding the concept of Lean, acknowledging the connection between efficiency and waste.

The next innovator in Lean history built upon the Gilbreths’ conceptual focus of Lean. His name was Frederick W. Taylor, and he began his work in 1901 after being fired from Bethlehem Steel for his constant arguments with the other managers. He had been hired at Bethlehem Steel in 1889 to solve capacity issues within their machine shop. During this time, he had developed his own ideas about how manufacturing should be done, and he felt strongly about sharing them. Although his passion and ideas may have gotten him fired, without them, Lean would not be what it is today.

Taylor followed in the Gilbreths’ footsteps by merging science with production. He studied how workers performed tasks and how their movements affected productivity. From this, he concluded that no matter how hard someone worked, optimizing and standardizing tasks would always be a more efficient and productive approach.

Further, Taylor focused on measuring workers’ speed through job analyses and time studies. His goal was to learn how he could alter conditions and optimize processes to increase and maintain a given rate of productivity. Job analysis broke the work down into individual tasks to determine which ones were productive and which ones could be done by someone else with less skill or eliminated altogether. He believed the key to productivity was to break down and simplify tasks so that even unskilled laborers could do them well.

In order to integrate his ideas into factories, Taylor developed the concept of scientific management, in which managers could study their employees and assess productivity using his methods. In 1911, Taylor published a book entitled Principles of Scientific Management, which illustrated how the scientific method could be applied to management to foster employee productivity. Eventually, his ideas became known as Taylorism.

Although the concept of scientific management or Taylorism was beneficial in some ways, Taylor was almost too overzealous in focusing on scientific management of business processes.  He ignored the behavioral aspects of employees and employee satisfaction. He became controversial for treating factory workers as mindless and replaceable, like pieces of machinery.

Despite this, Taylorism has become a very important part of both Lean and world history. Toyota’s production system was largely influenced by it. Additionally, this concept caused a huge spike in the productivity and output of U.S. factories during World War II. Because most factories were producing items needed for the war, increased production in the United States played a pivotal role in the victories against the Allied Powers. After the war, the production boom continued. Thanks to Taylorism, the United States became a dominant industrial power.

In 1891, Henry Ford began working as an engineer at the Edison Illuminating Company of Detroit. He built his first working gasoline engine in the year 1893. By 1896, he had built his first vehicle. Commonly referred to as the Ford Quadricycle, this contraption was made using the frame of a horse buggy, four bicycle wheels, and a gasoline engine.

Later that year, Ford got the opportunity to meet Thomas Edison, who was quite impressed with his designs. He encouraged Ford to continue his work. By 1898, Ford had completed his second vehicle and resigned from the Edison Illuminating Company to pursue his work full time.

Ford opened his first automobile company with capital from Detroit lumber baron William H. Murphy in 1899. It failed within three years. He formed a second automobile company called the Henry Ford Company in 1901 and left it within a year when Murphy brought in a consultant named Henry M. Leland. They had planned to liquidate the company but decided to reorganize it instead. As a result of this, Ford left, and the Henry Ford Company became the Cadillac Automobile Company.

Ford opened the Ford Motor Company on June 16, 1903 with $28,000 in capital from a group of shareholders that included the Dodge brothers. His goal was to design a vehicle that was affordable to the masses On October 1, 1908, the Model T was released. It was priced at $825, which is about $23,000 today. Through the implementation of Lean manufacturing practices, its price steadily decreased every year. By 1920, most Americans were driving a Model T.

In 1910, the Ford Motor Company relocated its operations to Highland Park, Michigan, which is often called the “birthplace of Lean manufacturing.” Here, Ford and a core group of talented engineers and mechanics experimented with various production methods, layouts and material handling processes to streamline their operations. By standardizing processes, continuous flow and advanced machining techniques, they reduced assembly time from 12 hours to under three hours. As a result, Ford’s vehicles became affordable to everyone and demand skyrocketed.

Henry Ford began his involvement with the concept of interchangeability while planning the production of his Model N automobile. He believed that interchangeability was essential in increasing production output. He also decided it was important to simplify operations. In order to facilitate interchangeability and simplification, one of Ford’s mechanics built new machines that he claimed were simple enough that anyone could successfully produce a high-quality result.

By this time, there were just a few final steps before the famous Ford assembly line could be implemented. First, Ford and his team set up machine tools in the order of their operation and installed gravity slides for the quick movement of parts from one stage of assembly to the next.  However, the most important step was simplifying tasks enough for unskilled laborers. Once this was done, the first Ford assembly line came alive, and workers would move from station to station to complete each part.

The issue with this was that some workers could move more quickly than others, and Ford needed to figure out some way to regulate production speed. The best way to do this was to control the speed of the assembly line instead of employees’ speed. The assembly line cut the overall assembly time for a Model T engine by more than 50 percent. By 1913, Ford was producing 200,000 automobiles per year.

Despite how seemingly grand the Ford Motor Company was, there were many problems. The first of them was retaining employees. Ford production depended on a labor force that was so desperate for money and jobs that workers would sacrifice their dignity and self-esteem for a mere five dollars an hour. They would interview and hire hundreds of people at a time because, by the end of the day, half would leave.

It wasn’t until the advent of labor unions in the 1920s that employees had any way to speak out against poor treatment and conditions. Also in the 1920s, the automobile industry was exploding. To compete, Ford would need to offer new models annually in multiple colors. The Ford assembly line couldn’t easily accommodate this level of flexibility.

At General Motors, a major competitor to Ford at the time, Alfred P. Sloan knew this was his chance to steal the market from Ford. Not surprisingly, Ford’s production practices were the basis on which he did it. Sloan developed business and manufacturing strategies for high volume production quantities and variety. By the mid-1930s, Sloan and General Motors had surpassed Ford and dominated the automotive industry.

Ford’s contribution to the war effort

Despite all of this, many Lean production concepts utilized by Ford became integral parts of the growth of the automotive industry, allowing Ford to keep his claim to fame. In fact, Ford’s methods of production, in conjunction with Taylorism, were a deciding factor in the Allied victory of World War II.

Henry Ford hated war. In fact, for quite a long time, he refused to allocate production towards the American war effort. However, Ford’s Charles Sorensen decided to use his knowledge to help build aircraft for the U.S. Air Force. Before his assistance, the average production rate was one B-24 bomber per day. By the end of the day, the Willow Run Ford plant was able to produce one B-24 bomber per hour. By implementing these practices in other U.S. manufacturing companies, Sorensen helped to secure America’s victory against the Axis Powers.

The importance of Fordism and Taylorism and other Lean concepts to Allied victory in World War II sparked the attention of a Japanese innovator who had visited Ford in 1911. This innovator would soon revolutionize Lean as we know it, but that’s a story for another Wednesday. Join us next week for part 4 of Lawton’s series on Lean history.

“KAIZEN HISTORY.” The History of Kaizen. Accessed May 24, 2019. http://qualitiamo.com/en/improving/kaizen/history.html.

“Learn about the History of Lean Thinking.” Lean Management Institute of India. Accessed May 24, 2019. http://www.leaninstitute.in/what-is-lean/history-of-lean.

“Which of Your Friends Needs to Learn This Term?” BusinessDictionary.com. Accessed May 24, 2019. http://www.businessdictionary.com/definition/Taylorism.html.