The history of Lean – part 2 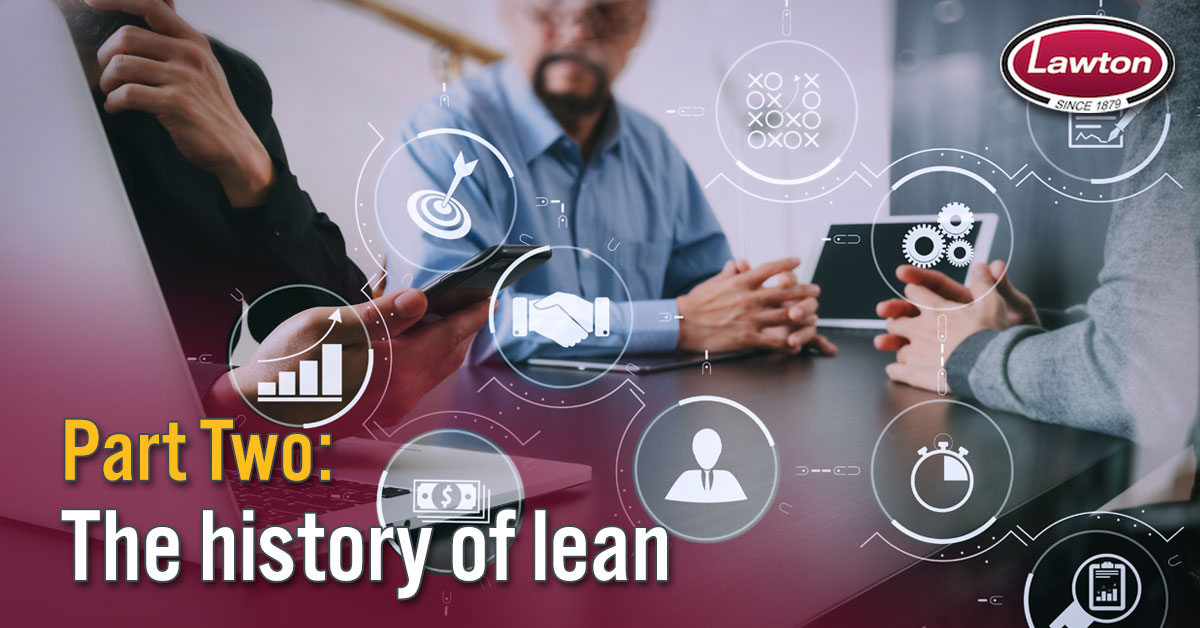 Since the 1400s, innovators like Jean Baptiste Vaquette de Gribeauval, Honoré Blanc and Eli Whitney have developed new ways to eliminate waste in manufacturing. By reducing waste, processes become Lean and manufacturers are able to meet and sustain higher quality standards more safely and efficiently. Although Whitney, Ford, and Toyota are commonly credited for the concepts that make up Lean, its rich history has many contributors whom we will uncover as we tell the story of its history.

After Eli Whitney popularized the idea of interchangeable parts, other innovators set out to apply this, and the concept of continuous/standard flow to mass production. This was first achieved in 1803 by Marc Isambard Brunel, Henry Maudslav, Simon Goodrich and Samuel Bentham in Hampshire, England during the culmination of the Napoleonic War.

During the War, the Royal Navy needed pulley blocks of various sizes for its ships in quantities of 100,000 or more. Until this point, they had been made by hand, causing them to be inconsistent in quality and design, as well as costly and time-consuming to produce. Brunel and his team devised an innovative solution to this challenge.

In order to produce the pulley blocks quickly in such high quantities, Brunel developed a system of 43 machines that were broken into three series, each designed to make a range of block sizes. They were laid out on a production line, so each stage of the work progressed to the next in a natural flow.

The machines would make markings and indentations on the blocks to ensure alignment throughout the process. The result was a series of identical products that could be easily interchanged. One of the many advantages of this new method was the increase in labor productivity because this streamlined process didn’t require as much handwork by workers. By 1808, its production capacity reached 130,000 blocks per year.

These men were some of the early pioneers of the age of mass production. Their innovation is regarded by many as a key part of the British Industrial Revolution.

In 1806, Terry accepted a contract for the production of 4,000 clocks, known as the Porter Contract. Terry completed the order in three years. This became the first example of mass production of interchangeable parts in America.

Terry had discovered that he could produce clock wheels and plates using a milling machine. By incorporating this machine into his clock-making process, he was able to produce a dozen of each item simultaneously. He then used jigs and templates to ensure uniformity. He put the parts together in an assembly line format, something Ford became famous for 100 years later.

Before Ford was around to take credit for the assembly line, a man named Thomas Blanchard was actually widely known for the idea. Though Blanchard was only really responsible for popularizing its use, his many other innovations give him widespread credibility in the industry.

Blanchard was an American inventor who lived and worked in Springfield, Massachusetts. During his lifetime, he was awarded over 25 patents for his creations. By 1822, perhaps his most amazing innovation was completed. Blanchard had devised a set of 14 machines that made it possible to mass produce complex shapes like gunstocks for rifles.

A block of wood was placed in the first machine, the lever was thrown, and the water-powered machine automatically removed some of the wood using a profile tracer on a reference piece. This meant that the 14 machines could make a completed item with no human labor in a single piece flow. The items were moved from one machine to the next, one at a time. Through this innovation, waste was eliminated and the production of complex items was standardized. Blanchard was truly ahead of his time.

Throughout the 1800s, Lean concepts such as interchangeability of parts, just-in-time production, standardized processes and continuous flow became commonly-used ideas. By the 1850s, all of the American armories were making standardized metal parts for standardized weapons. However, a lot of labor was still required to perfect the parts because machine tools at that time could not handle hard metal. However, as the industry and the world progressed, Lean moved with it until the 1890’s when its history was changed by a female innovator.

“KAIZEN HISTORY.” The History of Kaizen. Accessed May 13, 2019. http://qualitiamo.com/en/improving/kaizen/history.html.

“What Role Did France Serve during the Industrial Revolution?” Quora. Accessed May 13, 2019. https://www.quora.com/What-role-did-France-serve-during-the-Industrial-Revolution.

“Which of Your Friends Needs to Learn This Term?” BusinessDictionary.com. Accessed May 13, 2019. http://www.businessdictionary.com/definition/Taylorism.html.