The history of Lean – part 1 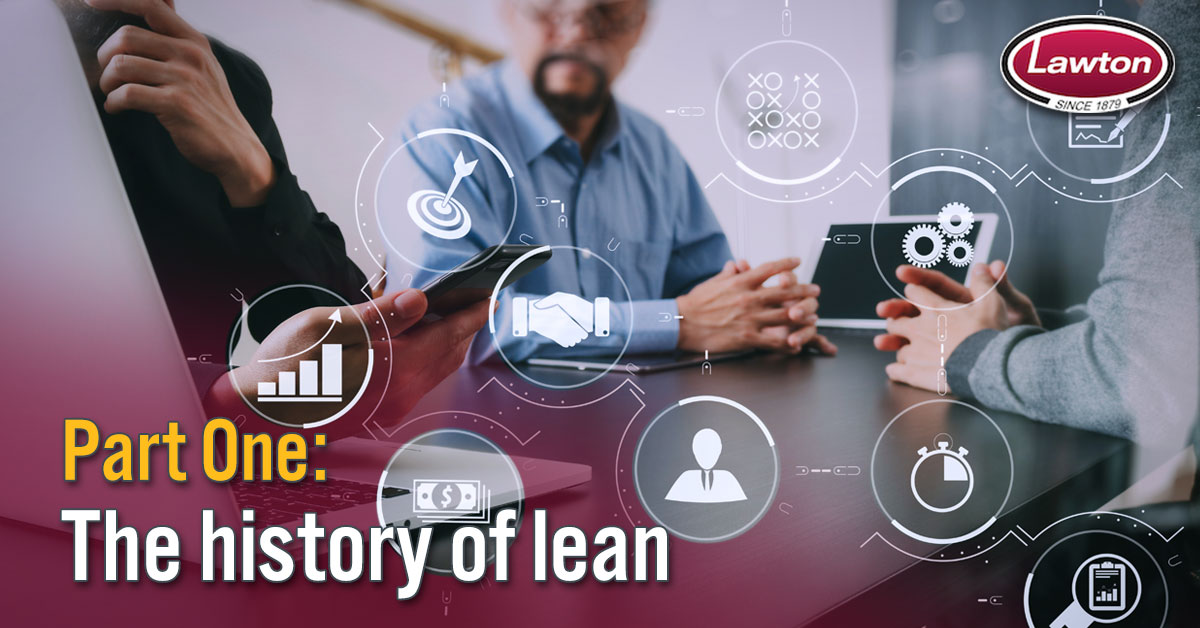 Although many people believe the concept of Lean originated with Henry Ford and Toyota in the 1900s, its roots can actually be traced back to Venice in the 1450s. Lean is a concept or way of thinking that focuses on eliminating waste and streamlining processes to save time, space, materials and money. Its name comes from this idea: when excess is removed from a process, it is reduced, or becomes lean.

Lean enables companies like Lawton to better serve their customers. Because it has been one of the key components of Lawton’s history, we thought we’d shed some light on it by exploring its roots.

In the early 1450s, through sequencing and standardizing the process of galley ship building, shipbuilders at the Venetian Arsenal were able to move ships through their entire production line in an hour. By 1574, the Arsenal’s process had become so advanced that King Henry III of France was invited to witness one of the galley ships being built from start to finish.

By standardizing process flow, the shipbuilders were able to maximize efficiency, quality, and safety, three of the key reasons why manufacturers use this Lean concept today.

Although Venetian shipbuilders are the first known users of standardized production processes, historians, citing ancient peoples such as the Greeks, Aztecs, and Egyptians, hypothesize that the roots of lean may be deeper and more widespread than we’ll ever know.

In fact, approximately 20 years before the Venetians, gigantic ships called Treasure Ships were constructed in China under the rule of Emperor Zhu Di for Admiral Zheng He and his armada. Over a 10-year period, nearly 300 ships between 440 and 538 feet long by 210 feet wide were built. It’s almost impossible to believe that this could have been accomplished without some use of waste-eliminating practices or standardized processes.

Although historians and archeologists can only research and hypothesize about the presence of Lean in ancient times, there is no doubt that many of its innovators came before Ford and Toyota.

The first of these innovators was named Marin le Bourgeoys. In approximately 1610, he created the first true flintlock musket for King Louis XIII. This musket was inspiration for the next leap in Lean history.

Throughout the decades, many new models of the flintlock musket were developed. By 1717, it became the first gun made using a standardized process. First used by the French infantry, this musket was often referred to as a French infantry musket or a French pattern musket, and later acquired the name “Charleville musket” after the armory in Charleville-Mézières, Ardennes, France. Later models of the Charleville musket remained in service until 1840 when percussion lock systems made the flintlock mechanism obsolete. The Charleville musket is also known for being the primary infantry weapon of the American Revolutionary Army as well as Napoleon’s army.

In 1732, Florent-Jean de Vallière was given a Royal ordonnance commanding him to redesign and standardize production for the king’s artillery. This led to the development of the Vallière system for making cannons more quickly with much less waste. This system was used until 1765 when the Gribeauval system was introduced.

The Gribeauval artillery system was introduced by Lieutenant General Jean Baptiste Vaquette de Gribeauval. It revolutionized the design and production of French cannons, making them lighter and more uniform without sacrificing range.

Through the development of this process, Jean-Baptiste deepened his understanding of standardized designs and interchangeable parts. He used this knowledge to assist the French military with their battle strategy using standardized designs and interchangeable parts to simplify weapon and machinery repairs on the battlefield. Baptiste’s final mark on the history of Lean was the way his early work inspired the work of young Honoré Blanc, the next innovator in our history.

Blanc was born in 1736 in Avignon, France, and at the young age of 12 became an apprentice gun-maker. With an extensive knowledge in gun-making, and inspiration from Baptiste’s work with the standardization of cannons and shells, he began focusing on the design and interchangeability of gun parts.

Blanc applied concepts used by Baptiste to muskets and used gauges and filing jigs to standardize the production of interchangeable parts. The uniformity of the parts was achieved via cut-and-try methods, using jigs, gauges and master models to guide hand filing. As each part was filed, it was repeatedly compared against a gauge or master model to ensure each part was exactly the same size and shape. Blanc’s ideas were revolutionary, but European craftsman were skeptical, and feared that their jobs and status might be threatened if Blanc’s innovations became widely adopted.

Honoré Blanc’s time in the spotlight began when, in 1789, Thomas Jefferson, who was the American Ambassador to France at the time, discovered Blanc’s innovations and believed they could free America from dependence on European sources for military equipment. However, Blanc refused to move to America to head the production operation.

As a result, Jefferson returned to the United States, and worked with the American Secretary of War to fund a gun production project. With the approval of President George Washington, they began using Blanc’s system to produce muskets in 1799 with Eli Whitney heading the project. While Whitney became widely known as the “father of interchangeable parts,” few will ever know this title truly belongs to Blanc.

Despite the way Eli Whitney became a part of this story, he plays quite an important role in popularizing the concepts of “Just in Time” or JIT production. Whitney is primarily known for inventing the cotton gin, and it is believed that his credibility from that innovation was what landed him the contract from the U.S. Army for the manufacture of 10,000 muskets when Congress voted to prepare the nation for war with France. They were made at the unbelievably low price of $13.40 each, and Whitney was hoping to make a fortune for himself by completing the task in less than two years.

The story goes that Whitney put on a good show for the group to support his story that he had spent the time and money perfecting the musket production process. Before two U.S. presidents and Congress, Whitney assembled muskets at record speed and efficiency by choosing (seemingly at random) from a pile of gun parts he brought with him. Everyone in the room thought Whitney was a genius. Little did they know that Whitney’s performance was a carefully orchestrated ruse. This was later proved when someone found that the parts had been labeled, and that they were not exactly interchangeable.

Even after discovering Whitney’s dishonesty, President Jefferson continued to credit Whitney for these innovations. He most likely did this because he had been the one to steal this process from Blanc in the first place.

Luckily, there are many more innovators in this history whose morals and decisions are much less questionable. Their stories will be featured in the upcoming parts of this fascinating history of Lean.