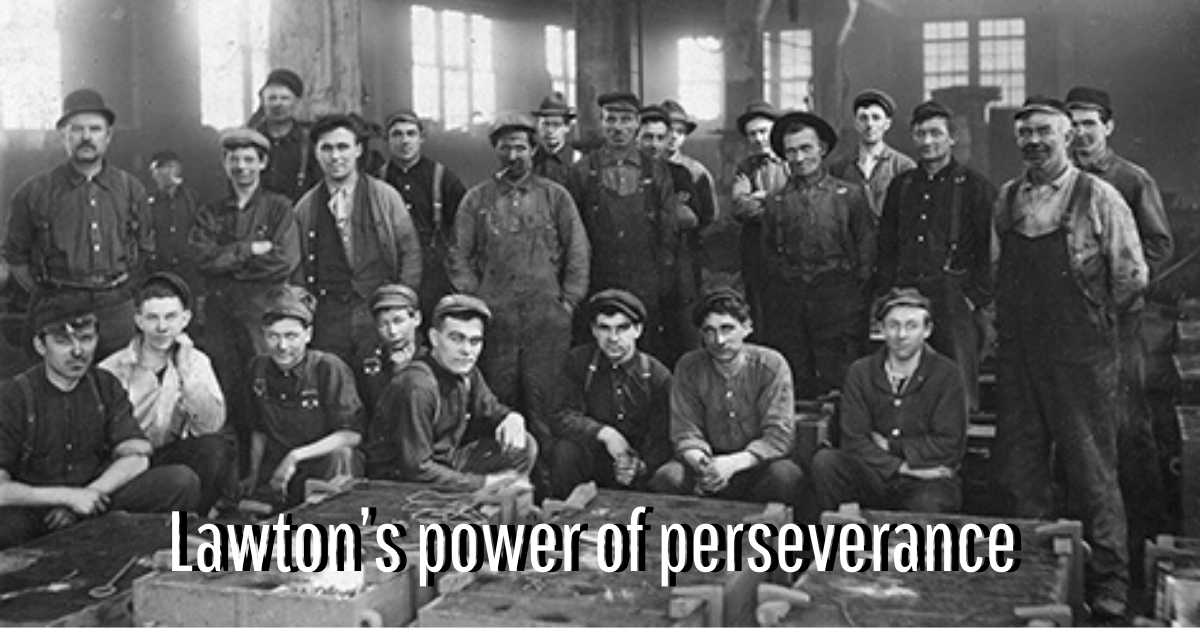 Through all the past struggles Lawton has faced, it is important to look back on everything they have overcome.  From the Great Depression or even the Recession of 2008, Lawton continues to persevere through hard times.

In 1886, Jones Bank ran into financial difficulty, and as a result, closed its doors. This caused a great deal of stress for the Novelty Manufacturing Company. Lawton and Arndt feared the seven-year-old company would have to close its doors.  Fortunately, one local businessman bought the title to the Novelty Manufacturing Company from Jones Bank for $4,000 and sold it back to Lawton at a profit of only $500. Other business owners offered to make trades with Lawton in order to provide the company with the resources it needed to stay afloat.

In 1929, The Great Depression hit, causing a great deal of change and difficulty for the nation, and for The C.A. Lawton Co. in the coming decade. The Great Depression also resulted in eventual bankruptcy for the Buhl Company, leaving Lawton to handle the total production cost of the air compressors. With the financial strain already placed on the company by the depression, this was a giant stress for Edward Lawton and his company. In the face of these financial tensions, Lawton was forced to lay off many of its dedicated workers. Those that stayed on, including Edward Lawton and his family, took dramatic pay cuts in order to keep on as many people as possible. Some weeks, payroll was missed altogether. However, they always tried to make up for it in future weeks.

In 1970, a design was engineered incorrectly. This flaw in engineering cost the company between $35,000 and $40,000. That is the equivalent of losing approximately $260,000 today. After a financial hit of this magnitude, Lawton began hiring degreed engineers in order to eliminate the likelihood of another such costly mistake. Though not all of Lawton’s engineers were degreed even after this point, by introducing degreed engineers who could work on a higher level, engineering, and redesigning Lawton’s processes, Lawton was changed for the better as a manufacturer.

In 2008, Alex Lawton’s careful management of the company finances proved valuable when a recession hit. This was called The Great Recession because of the extraordinarily steep downturn in the economy, and how long it took to recover. During the recession, Lawton did what it had to do to survive. Nearly everyone who stayed on at the company took pay cuts, and some employees were asked to work three weeks per month in a rotation so that more people could remain employed. Alex did all that he could to avoid laying off people, just as his great grandfather did during the Great Depression. As always, the most important thing was taking care of the family of Lawton workers.

Throughout Lawton’s 140 years, there have been many hardships they have faced. These obstacles and challenges have strengthened the company immensely making Lawton more unified and cohesive than ever before.