The history of The C.A. Lawton Co.: The fifth generation 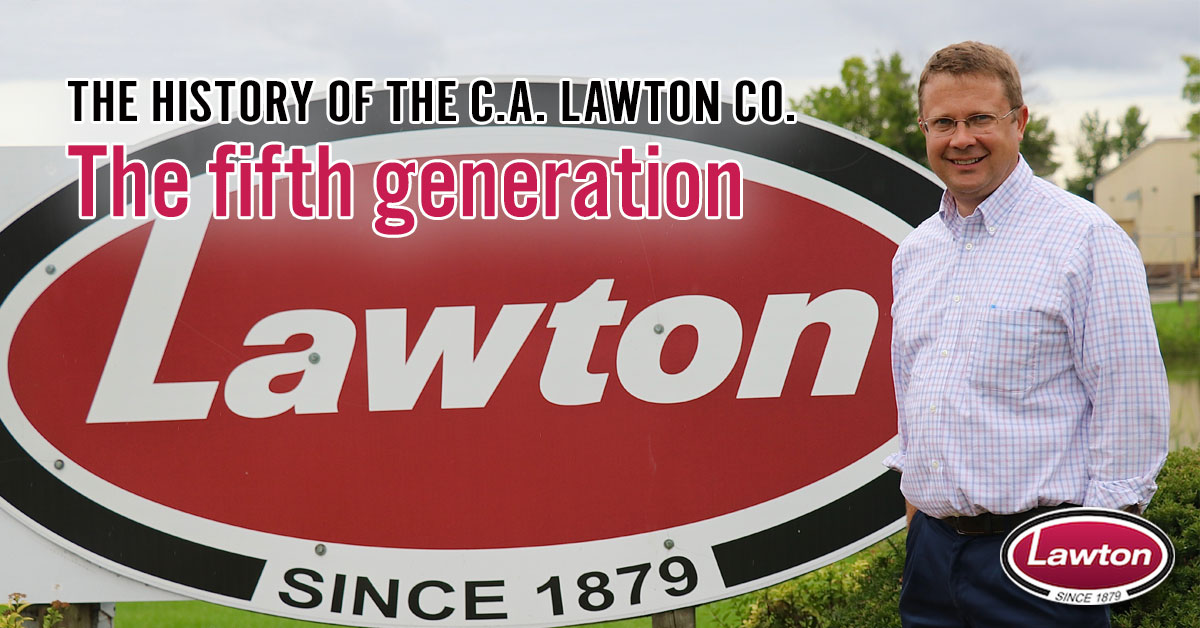 After the 9/11 tragedy, a recession hit Lawton’s corner of the casting industry, causing the company to struggle financially. Seeing this, Alex Lawton, decided to return to De Pere to help his father Randall run the company, using his knowledge of business and finance.

Alex’s return not only benefitted the company from a business standpoint, but also from a community standpoint. Now today, as the current CEO and president of Lawton, Alex continues to foster community and innovation through teamwork and continuous improvement. This is the story of Alex Lawton, the fifth-generation leader of The C.A. Lawton Co.

In 2003, Alex Lawton initially came back to the company to be involved in succession planning for the company, which involved making decisions about who would take over the company if necessary, and what practices they should eliminate, continue or add to improve the company for the future. During this process, Randall and Alex became more aware than ever of the state the company was in. It was at that moment that Alex decided he needed to use his mind for business to help Lawton thrive again.

At first, Alex came back part-time. His time in De Pere was spent organizing a new leadership team within the Bay Engineered Castings (BEC) an , and implementing practices to improve communication, quality, and efficiency. With Alex’s assistance, Randall was able to focus on Lawton, and together they worked to make the entire company a well-run machine. However, Alex knew that the company needed more than just his part-time attention. So, he returned full time and became the foundry head for BEC.

In 2005, there was a boom in the waterworks industry, and Lawton immediately took advantage of this opportunity. This resulted in new business for the company, and an inflow of capital that helped it become profitable once again.

Over time, as the company began to regain its footing, Alex’s focus shifted to Lawton. During this time, Alex and Randall worked side by side, and he quickly proved that he was ready to take over as president. Thus, on June 6th 2006, Alex became the 5th generation president of The C.A. Lawton Co and the Bay Engineered Castings Foundry, and Randall adopted the role of chairman of Lawton’s board of directors.

Change came swiftly to the company within months of Alex taking over. On December 21st 2006, Bay Engineered Castings and The C.A. Lawton Co. became one company through a reverse merger. The BEC foundry became the Lawton foundry, and Lawton began operating as one fully integrated company.

Though the company had come a long way since 2003, Alex knew there was still work to be done. The first step was to enhance the collaboration of the company’s management teams. Secondly, Alex decided to shrink the business in the restructuring process. The company was foundry-focused at this time, and thus Alex sold the machinery division, sold the paper engineering services of the company, and made additions to the pattern shop.

Additionally, Alex really wanted to focus on improving the company’s ability to manufacture overall. In 2007, as part of this improvement initiative, Lawton began purchasing new machines, tools, sand pumping systems, and blast machines to rejuvenate the foundry and improve its process capabilities. Alex made these purchases and improvements over time, being cautious with the company’s finances.

Alex’s careful management of the company finances proved valuable when in 2008, a recession hit. This was called The Great Recession because of the extraordinarily steep downturn in the economy, and how long it took to recover. During the recession, Lawton did what it had to do to survive. Nearly everyone who stayed on at the company took pay cuts, and some employees were asked to work three weeks per month in a rotation so that more people could remain employed. Alex did all that he could to avoid laying off people, just as his great grandfather did during the Great Depression. As always, the most important thing was taking care of the family of Lawton workers.

All the effort Alex had put into building cohesion and relationships within the company while restructuring it also proved more important than ever at this time. By cultivating these relationships, Alex was able to gain his employees’ trust, and he trusted them. Strengthened by these extraordinary challenges, the company become more unified and cohesive than ever before.

After the recession, in 2011, Lawton focused on rebuilding financially, and on paying everyone back for their sacrifices during the downturn. Although Alex was discouraged from doing this, it was something he wanted to do because of how much he valued the efforts of his employees… his team.

Moving forward, Alex also made new hires and began strategizing a new business plan. The first step in this plan was to latch onto existing customers and grow business with them. The second part of the plan was to find the next booming market and use it to grow the company. This plan began to unfold when Lawton took advantage of a post-recession boom in the natural resources market. From 2011 to 2014, Lawton capitalized on this by manufacturing parts needed for mining, oil and gas, and the agricultural industries.

This market opportunity provided Lawton the finances necessary to reinvest in and regrow the business and repay everyone. The company was thriving once again.

In 2015, Alex and his right-hand man parted ways, and Alex intentionally did not replace him. This meant that he would be overworked, with a great deal on his plate. But he knew that, over time, it would prove to be valuable for the company in the long run. He was committed to finding the right plan and the right person to help him transform the company into all that it could become.

During this time without a strong senior management team, Alex looked closely at the company as a whole. He felt that Lawton had a good culture, but that accountability was lacking. He also felt that Lawton had honed in on improving production of specific parts, but that its overall manufacturing processes still needed improvement. Alex began asking the question, “How am I going to transform us into a more accountable, higher-performing manufacturing company?” He knew that the company could not simply rely on its existing niche markets. It had to learn general best practices for manufacturing so that the company could be a better manufacturer of anything a customer needed within its production capabilities.

With these thoughts on his mind, Alex began researching manufacturing strategies and practices. His research led him to the lean manufacturing model, which focuses on eliminating non-value added activities and continuous improvement. The company had actually been attempting to implement the lean business model since 1995. This was Lawton’s third or fourth try at it. However, in previous attempts, the company had only adopted bits and pieces of the model. As a result, it never lasted. This time, Alex was going to take it step by step and do it right. He had the mind for it, and soon he would have the right partner for it.

Later in 2015, Alex met Barry Adamski at a business function. They began discussing Alex’s plan to integrate lean into Lawton, and Alex found that Barry was also an advocate for this innovative business model. In early 2016, Barry began splitting time between another job and Lawton to provide support for Lawton’s lean journey. By the summer of 2016, Barry came on full time as Chief Operating Officer (COO), and as an ally to Alex in transforming the company using lean.

With the assistance of Barry and lean consultants like Cathlin Stuntz, who is now employed full time as Lawton’s director of operations, lean finally stuck this time. Leadership and management positions have been filled by people who support this business management methodology, creating cohesion and cooperation. These individuals have also been responsible for influencing their teams.

Since the implementation of lean, both Alex and Randall have noticed that Lawton’s culture has become increasingly accountability-oriented. The people who remain at the company are aligned with and want to grow that culture. Teams are better organized, and decision making has become more intentional, with increased focus on prioritization. Through better organization, prioritization, encouraging employees to take action and make improvements, every aspect of The C.A. Lawton Co. has been moved up a level since 2016. According to Alex, “Lean has been a metamorphosis of how we think about our business.” Lean helped Lawton become accountable for the very things that support a sustainable and successful business.

Like his four ancestors, Alex has a mind for innovation. He has used this focus to improve the culture and environment of Lawton. Today, its core elements are continuous improvement, safety, and lean. Lawton employees work more independently. People are responsible for designing their own work. This takes more effort, but the type of employees that Lawton wants are those that want that autonomy, and want to have that voice.

Through lean, Lawton has created a tight-knit community of hardworking and driven individuals that value team involvement as much as they value autonomy and decision making. Finally, lean has opened up the company to more manufacturing opportunities. Through lean, Lawton now has a flexible manufacturing process that is more streamlined than ever and is improving every day.

In conjunction with lean, there are many other recent developments and successes occurring at Lawton. The first is our marketing program. As a 139-year-old company, the age of online marketing is a new concept. However, as part of our company’s continuous improvement efforts, it is rebuilding its website, and enhancing its blog and social media content to tell its stories and positively influence its customers, prospects and potential hires online. As part of this process, the company has adopted the tagline, “Remarkable people. Remarkable results for over 135 years.

Lawton is starting to do quite a bit of work with a customer it has pursued for almost 15 years. Now that its people have taken the time to get to know Lawton and what it can do for them, they are treating the company as one of its significant supplier-partners. In addition, a major multi-national industrial company has made Lawton the only gold-status preferred supplier of its type in their network. As a result, they have been awarding Lawton more “transfer” business (moving existing castings to Lawton) and new product development (NPD) opportunities. Finally, the company has been nominated for various awards within its industry. This recognition of these efforts is quite an honor.

As a result, today’s C.A. Lawton Co. is a tight-knit community with a remarkable culture of innovation. Because Lawton is a fifth generation family-owned company that places great importance on community, everyone in the company is family. As a family we push each other to think of new ideas every day.