The history of The C.A. Lawton Co.: The fourth generation 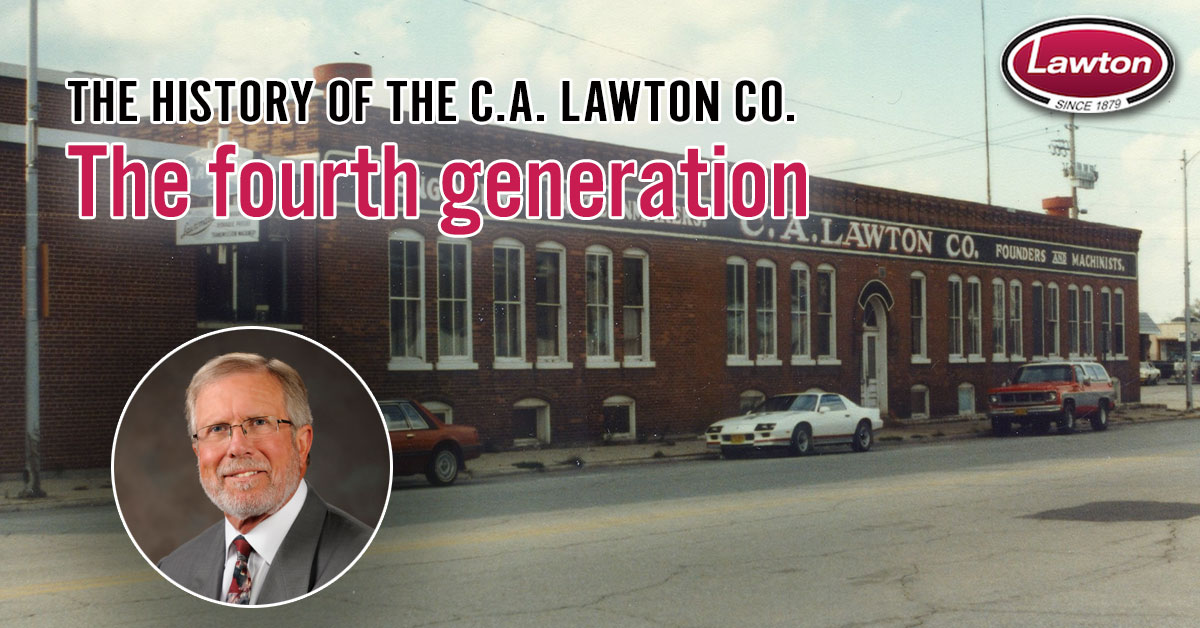 In the early 1970’s, The C.A. Lawton Co. was enjoying a period of stability. Through expanding the manufacturing facilities and hiring degreed engineers, the company was setting new standards for quality and productivity. However, this stability came to an end when, in 1973, Charles Lawton II, known fondly as Choppy, passed away suddenly. Choppy’s passing meant that it was time for his sons, Randall W. Lawton and Charles A. Lawton III, to carry on the company legacy. Randall and Charles were the start of a new generation of change at Lawton, and they are where the next part of our story begins.

Toward the end of 1973, The C.A. Lawton Co. decided to enter into a joint venture with Rothe Foundry of Green Bay. Though Lawton was equipped with a foundry, Randall and Charles knew their foundry facilities did not meet safety and environmental standards. Additionally, the cast components portion of the business was small, so the investment needed to renovate the foundry did not seem worthwhile. However, the company did not want to give up on the castings market, so a joint venture with Rothe was the perfect solution. Entering into this relationship with Rothe meant that Lawton could combine its foundry with Rothe’s.

Because Rothe was already an established foundry, Randall and Charles knew that combining Rothe’s capacity with Lawton’s would make the investment in a new foundry worthwhile. They also knew that this joint venture would make their foundry large enough to compete with other foundries. Through building this relationship, Charles and Randall found the innovative solution that would allow Lawton to stand out in the industry through creating a more competitive business. Once again, through innovation and building relationships, The C.A. Lawton Co. was able to grow and succeed.

Lawton then invested the money needed, and with that, a newly expanded, environmentally friendly foundry and pouring operation was constructed in east De Pere, where the company’s foundry still stands today. Lawton owned the building and most of the equipment, and thus acted as an investment banker and landlord to Rothe. In addition, Lawton took on a non-operating partner role. The Rothe Foundry handled the cast components, allowing Lawton to focus on the machining and engineering aspects of their manufacturing process.

While the foundry was being built, Randall had spent a lot of time overseeing the process in order to ensure that everything was done correctly. This time and effort, and the fact that Lawton owned the facility and most of the machines, proved valuable when Rothe went bankrupt in 1978. The company’s investment in the foundry meant that despite Rothe’s financial struggles, Lawton could continue to supply cast components, and maintain its business.

Later in 1978, due to changes made to a law, a product liability issue arose for Lawton. In order to protect the company from bankruptcy in the face of this issue, Lawton worked with lawyers to design a relationship in which Lawton owned shares of another company. This company then became a wholly owned subsidiary of The C.A. Lawton Co. Through this arrangement, Lawton’s foundry facilities became Bay Engineered Castings, known more commonly as BEC, on August 4th, 1978. Also in 1978, Randall Lawton took over as President of Lawton, and Charles Lawton took over as treasurer of BEC.

Over the next 5 years, Bay Engineered Castings and The C.A. Lawton Co. operated as separate companies, and were split into three individually-managed profit divisions: the Bay Engineered Castings foundry, the Lawton pattern shop, and Lawton’s capital goods machining operation, which was largely used to serve the paper industry. One of the main issues with this arrangement was the lack of cohesiveness and communication between the divisions. Employees would report to their respective manager, and information would be passed along from person to person instead of collaborating and actively communicating throughout the organization. This became a great hindrance to Lawton’s ability to take advantage of new market opportunities.

In 1983, a recession hit, sinking Bay Engineered Castings. In order to restore the foundry, on October 1st 1983, Randall Lawton took over as president of BEC. Immediately, Randall began taking steps to improve the stability, productivity, and cohesiveness of the foundry. The first step was to make new hires. By filling the foundry with individuals who are focused on productivity, teamwork, improvement, and communication, Randall knew he was setting the company up for success.

Next, to improve communication and cohesion, department meetings, company-wide meetings, and management team meetings were implemented. This was an opportunity to ask questions, and introduce new ideas. Though these things seem simple, these changes created a strong community within the company once more, and by 1985, Bay Engineered Castings was on its feet again. BEC existed as the brand and trade name for Lawton’s commercial castings until 2006 when BEC and Lawton became one brand.

By hiring the right people, implementing the right management principles, and investing more money into the foundry, Randall was able to bring the foundry from a tier three to a tier one foundry. This meant a dramatic increase in BEC’s quality, productivity, and profitability. Thanks to Randall’s savvy leadership, BEC reduced its quality costs from 15% to 3.5% in only two and a half years. They went from losing money to making the BEC foundry one of the most profitable parts of the business. This was all done through working on productivity, cohesiveness and communication, and adding in experienced engineers to rework and improve processes. Lastly, Randall assisted BEC in strengthening relationships with key customers. As a result, BEC became extremely successful.

September 11, 2001 was a devastating day in our nation’s history. We forever remember the victims and heroes of 9/11. Soon after this horrific event, a recession hit Lawton’s corner of industry. During this industry struggle, many manufacturers were searching for lower-cost options for labor and production.

Orders were low, business was slow, and as a result, profits were down. This put pressure on U.S. manufacturers to cut costs. In order to do so, many companies moved their operations overseas. In the long run, globalization was a positive thing. It allowed companies to reach new markets. However, in the short run, it was difficult for companies that were unable to quickly reach international markets. The companies that easily made this move were those with high volume, low variability products. Lawton, however, was creating large, specialized metal castings in lower quantities This placed Lawton far behind the wave of globalization, which resulted in a period of financial challenges for the company.

In 2003, Randall’s son, Alex Lawton, was working in Chicago. Seeing that the company was still struggling, Alex decided to allocate some of his time to help out his father run Lawton, proving once again the strength of family and community within the company. Although Alex only returned to provide extra assistance, his mind for innovation and business would soon prove that he was ready to become the fifth-generation president of The C.A. Lawton Co.