The history of The C.A. Lawton Co.: The third generation 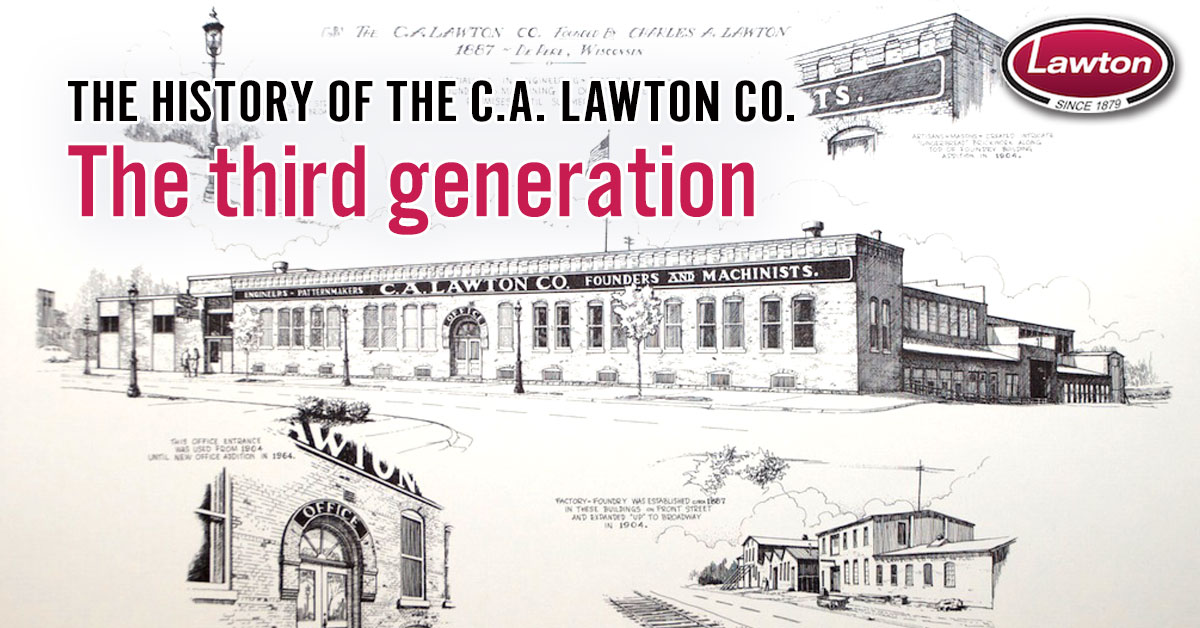 Through Lawton’s latest innovation in power transmission, V-belt sheaves, the company was finally beginning to overcome the financial strain of The Great Depression. Due to the great deal of uncertainty Lawton faced during The Great Depression, Edward Lawton felt it imperative to plan for the future. In order to do so, Lawton began producing Rotor Stator presses in 1937, which led to making molding presses for rubber and plastics manufacturing. This product line allowed the company to gain a foothold in the increasingly profitable hydraulic press market, providing Lawton the stability it needed for the future.

In 1939, after a long decade of hardship, the Great Depression was finally coming to an end. The company had survived this economic downturn solely because of Edward Lawton’s value for community and knack of innovation, and his employees’ patience, hard work, and dedication. By this time, Edward Lawton was worn out. So, he decided it was time to let his son, Charles A. Lawton II, take over as president. Edward Lawton stayed on as vice president to offer continued support to his son as he took on this new leadership role.

Within a year, Charles Lawton II, known best by those around him as ‘Choppy’, proved himself ready to carry on the tradition of innovation through the creation of the Lawton Roll Wrapper. Two brothers by the last name Witbro came to Choppy and his father with this idea, and Lawton agreed to fund the development of the roll wrapper. The machine was designed and constructed by a small band of men, including the Witbro brothers, for the purpose of wrapping toilet paper rolls in a tissue overwrap. Before its advent, factory workers were only able to wrap 5 to 7 rolls per minute by hand. This machine could wrap 50 rolls per minute automatically.

After some trial and error, the Lawton roll Wrapper was ready for use, and the first target to try out the machine was a company in Oconto Falls, Wisconsin. Choppy’s brother-in-law was a manager there, and their toilet paper wrapping was all done by hand, so this was the perfect opportunity to get the roll wrapper on the market. This machine greatly benefitted the productivity of the company, and at that moment, Lawton knew it could do the same for many others.

In order to get other companies interested, Witbro brothers would simply load up the Lawton Roll Wrapper onto a truck and drive it across the United States. Companies would test the machine, see the value it added, and make the purchase. The Lawton Roll Wrapper even went as far as benefitting the hotels, restaurants, and other establishments that purchased tissue wrapped toilet paper for their business.

Not only did this machine introduce new efficiency to the paper industry, but it also opened up many new doors for The C.A. Lawton Co. The roll wrapper was Lawton’s debut in the international marketplace. More than 2,000 Lawton Roll Wrappers were sold worldwide, and production continued all the way until 2006.Thus, through this machine, Lawton was able to grow his network, and ensure financial stability for the company into the foreseeable future.

When the United States entered World War II in 1941, Lawton, like most other companies at this time, began manufacturing products for the war effort. Such products included ship propellers and submarine parts, and hydraulic shell banders. Through building a machine to band artillery shells, Lawton assisted in enhancing the accuracy and range of guns used on American ships during World War II. Also, at this time, unionization was encouraged by the War Labor Board. By 1945, Lawton had adopted its first union contract.

In the 1950’s, Lawton had three basic product lines: their power transmission line consisting of gears, pulleys, and sheaves, their line of roll wrapping machines, and their plastic and rubber molding machines. The economy in the United States was growing very rapidly post-war because most of the world was relying on U.S. production of industrial goods. Because of this, many of Lawton’s customers were conducting business internationally. As countries began to rebuild financially, demand for products like toilet paper increased. As a result, demand for the Lawton Roll Wrapper went international. Thus, through making connections with the right customers, Lawton and the Witbro brothers were able to get The C.A. Lawton Co. into international markets.

By the late 50’s and early 60’s, Lawton’s hydraulic presses were being made bigger and better than ever before. The economy was prosperous, as was the company, so Choppy decided to expand the company’s facilities. Once completed in 1964, the new addition provided the height and crane capabilities Lawton needed for their newly improved hydraulic presses.

In 1966, The C.A. Lawton Co. began production of nylon tooth gears. This was the first major innovation in decades for power transmission, and Lawton was at the forefront of it. This Lawton design was intended to reduce noise levels in manufacturing facilities, and was a huge success, especially in the paper industry.

In paper companies, there would be 60 or more metal on metal gears grinding all in one room. The noise created by the gears was so loud that it was hazardous to employees’ hearing, and paper manufacturers were concerned about this. By introducing nylon, noise levels were reduced by at least half. Though this was a more expensive option, Lawton knew that safety and quality of the work environment were more important than price. Ultimately, it was this innovation that solidified Lawton’s position as a manufacturer for the paper industry.

Until 1971, Choppy and his father before him were the only degreed engineers at the company. Through the company’s apprenticeship program, Lawton would educate and train skilled laborers who were quite knowledgeable, so the need for degreed engineers was never an issue in question. However, in 1970, a design was engineered incorrectly. This flaw in engineering cost the company between $35,000 and $40,000. That’s the equivalent of losing approximately $260,000 today. After a financial hit of this magnitude, Lawton began hiring degreed engineers in order to eliminate the likelihood of another such costly mistake. Though not all of Lawton’s engineers were degreed even after this point, by introducing degreed engineers who could work on a higher level, engineering and redesigning Lawton’s processes, Lawton was changed for the better as a manufacturer.

Through bringing on degreed engineers, Lawton adapted a culture of engineeryness, was able to manufacture higher quality products, and introduce consistency with regards to processes, allowing new standards to be set for the company. At this time, the company was steady. However, with the fourth generation ready to step in, change was on the horizon.