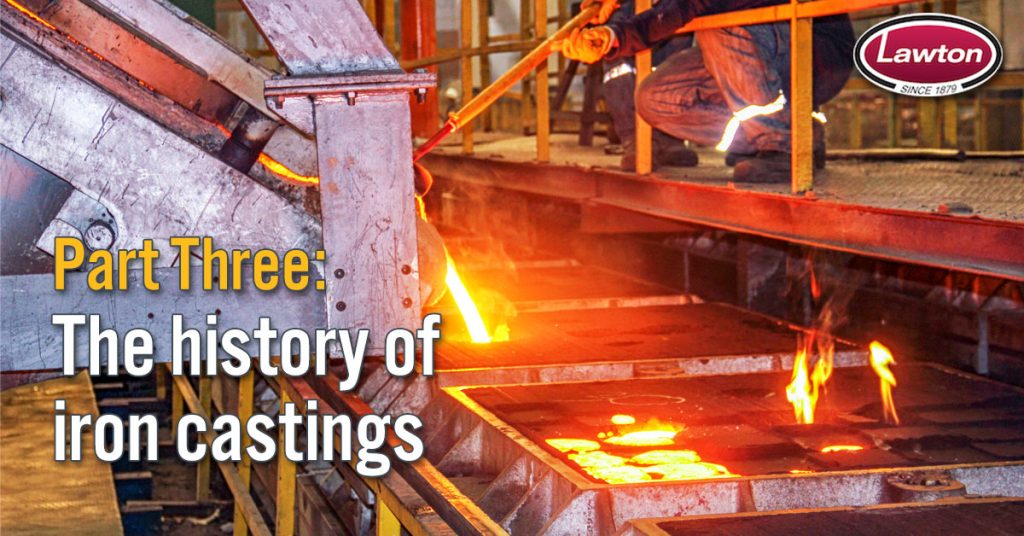 Not only did iron play a vital role in early world history, but its impact continues to be pivotal throughout recent history, in the present day, and into the future.

Iron was key a key element in military power during World War II. It was used to build British planes called Spitfires and Hurricanes, ship propellers and submarine parts, and hydraulic shell banders. Lawton assisted in enhancing the accuracy and range of guns used on American ships during World War II by building a machine to band artillery shells.

Cast Iron was also used to produce “pineapple” grenades, named because of their shape and design. Finally, iron was used in the production of firearms. Due to this large variety of uses, not including non-war uses, iron was very valuable, and everyone was eager to get their hands on it.

During World War II, Germany was heavily dependent upon iron ore from northern Sweden, a region that was rich in this valuable mineral. Much of it was shipped through the northern Norwegian port of Narvik. In 1939, the Germans discovered that Britain was going to stake its claim on a number of military bases in Norway. Possessing these bases meant Britain could easily block German iron imports as a war tactic.

To prevent this from happening, Hitler considered seizing the bases before the British army could reach them. The German Navy expressed to Hitler that possession of Norway would allow it to control the nearby seas; the bases could also serve as staging areas for future submarine operations against Britain.

However, Hitler decided to stand by a directive he had recently issued, which stated that Germany’s main war effort would be a land offensive through the Low Countries. So, Britain occupied the bases as planned. Germany soon regretted this decision. During the Battle of the Atlantic, Britain, and France set up a naval blockade to prevent Germany from receiving its iron and other supplies. It succeeded in weakening Germany’s armed forces. Without the possession and control of iron, the Allied Powers may not have won the war.

When Churchill became Prime Minister of England, he assigned William Maxwell Aitken, known as Lord Beaverbrook, as the minister for aircraft production. This position meant that was Beaverbrook had to figure out how to procure the desperately needed raw materials so that Britain could build warplanes called Spitfires and Hurricanes.

Lord Beaverbrook’s clever solution to this materials shortage was to repurpose the iron railings and gates used to enclose cemeteries, parks, and squares in Britain's towns and cities. This was done in 1940; as a result of this directive, many hundreds of tons of iron were removed by the authorities for use in the war effort.

Despite this setback, the Spitfire was one of the most important technologies in history. A brilliant, maneuverable and super-fast fighter, the Spitfire was pivotal to Britain’s strength against the Nazi air force, which was known as the Luftwaffe.

Thanks to the Spitfire, Britain’s Royal Air Force (RAF) was able to fight off the Luftwaffe in the Battle of Britain, despite being at a large disadvantage. Hitler had been building up his forces since the 1930s. During that time, British defense spending was at historical lows, limiting its ability to be prepared for such a battle. The Luftwaffe entered the Battle of Britain with 2,600 operational planes while the RAF had only 300 Spitfires and 500 Hurricanes. However, because of the Spitfire’s speed and agility, the Germans were unable to neutralize the RAF.

However, history unfolded as it did in part because of planes made of iron. It makes you wonder what our world would be like today without cast iron.

In our last article, we discussed the austempering process in which metallurgists use austenite to improve steel’s mechanical properties and eliminate the distortion of cast iron or steel. During World War II, this process was used to make gun parts. This process yielded minimal distortion and the resulting parts were tougher than those made from untreated metal. Many important gun parts are still austempered today for these very reasons.

The downside of this process was that the equipment needed for austempering was very inefficient, which made it expensive. Despite its high cost, by the 1950s the austempering process was used regularly in the production of steel and malleable iron parts. But its relatively high cost limited its use to only high-performance parts.

Also in the early 1950s, the second Industrial Revolution began due to the evolution of technology, with a focus on the growth of solidiﬁcation science and computational modeling. This age began with the work of scientists like Chvorinov on the mathematical correlation between casting volume, surface ratio, and solidiﬁcation time of metal, and Chalmers’ formulation of the constitutional undercooling criterion based on the redistribution of atoms during the solidification process, which lead to the understanding of how the cooling rate relates to the microstructure and hardness of cast alloys.

The age of virtual cast iron began with the usage of computational models of the microstructure and properties of cast iron. The first to do this was a scientist named W. Oldﬁeld. He created a computer model that could calculate the cooling curves of gray iron. He was also the first to try predicting the solidification microstructure of cast iron using a computational model. By 1985, solidiﬁcation modeling of cast iron became an important topic of research due to the continued improvement of models. Today, computer software can be used to simulate and model the entire process including mold ﬁlling, solidiﬁcation, and looking at the structures and properties of iron casting.

In 1966, The C.A. Lawton Co. began production of nylon tooth gears. This was the first major innovation in decades for power transmission and was designed to reduce noise levels in manufacturing facilities. It was a huge success, especially in the paper industry. To learn more about this and Lawton’s other innovations, check out our articles on Lawton’s 135-year history.

In 1972, a company called Atmosphere Furnace Company developed a pusher austempering furnace. This furnace is used to process materials that rely on continuous heat in a protective gas atmosphere. As the metal moves through the furnace, processes such as carburizing, preheating, washing, tempering, and cooling take place in a sequence. This process increased the productivity of the austempering process and drove down the price, making it competitive with conventional heat treatments.

Also in 1972, the austempering process was first commercially applied to produce Austempered Ductile Iron (ADI) at one of Atmosphere Furnace Company’s facilities. The austempering process, with ductile iron’s superior castability, results in a material which can be used to cast complex shapes, with greater consistency of quality, and often at less cost. Through the development of austempered ductile iron, the strength of cast iron increased over the years, eventually rivaling that of many types of steel. This made iron an even more important and competitive material for the manufacturing market.

Automatic ladle pouring systems have been in use in foundries since the early 1990s. However, due to their costliness, many foundries did not use them until more recently. Though the use of automatic ladle systems offers benefits such as ladle capacities up to 5,500 lbs., the ability to pour synchronously with continuously moving mold lines, and are able to accommodate changes in the grades of iron to be poured, drawbacks still exist. The biggest drawback of ladle systems is the lack of heated vessels. As a result, these systems must pour the iron they hold within 5 to 6 minutes to ensure proper pouring temperature.

Innovations in recent years have surrounded around technology, but that is probably not surprising what is surprising is how amazing these innovations are! In 2014, Siemens VAI, a known innovator for technology in the steel industry, launched a robot that can withstand harsh conditions such as the heat of a furnace. The robot is called SIMETAL LiquiRob, and it can perform tasks such as automatic temperature and sample measurement. Because of its abilities, this robot allows for such tasks to be performed more safely and efficiently.

Most recently, the industry has been facing issues such as energy efficiency and sustainability. In order to combat such issues, the American steel industry has been working since 2014 to create new iron- and steel-making technologies that will reduce or eliminate CO2 emissions. The initiative is called the CO2 Breakthrough Programme, and The American Iron and Steel Institute (AISI) believes that we can change the way iron and steel manufacturing are done. This opens doors for many new innovations.

Though it is expected that this change will not occur for another 15 years, some breakthroughs are already happening. The Massachusetts Institute of Technology is currently working on producing iron by molten oxide electrolysis. This technique generates near-zero CO2 emissions. Another project that is currently underway is called Ironmaking by Hydrogen Flash Smelting at the University of Utah. This process replaces carbon as a blast furnace fuel with hydrogen. Finally, AISI members are working on making a Paired Straight Hearth Furnace that can process waste from steel plants and virgin iron materials. AISI hopes that this equipment can be made available for commercial demonstration within five years, and they project that approximately 30 percent of energy use can be reduced with these new innovations.

Because the iron industry has reached maturity, its growth may not be as swift today, but it’s still evolving. We at Lawton believe there is always room to improve. That means you never know when the next innovation will come around to heat up the industry until it’s hotter than molten iron.