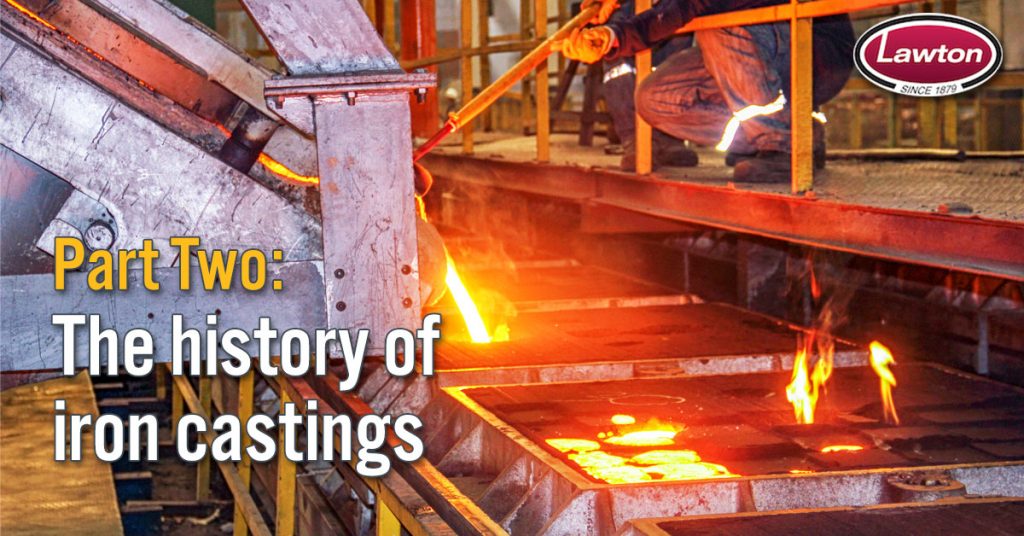 1825 was called the beginning of the New Iron Age. The iron industry was experiencing massive demand for the construction of railways and bridges, and on top of this, civilian use of cast iron products was increasing. At this time, anything that could be made of iron was made of iron.

The demand for iron continued to increase in 1828 when James Beaumont Nielson made improvements to Abraham Darby’s coke furnace. Neilson developed an energy-saving practice that used the waste exhaust heat to preheat combustion air. As a result, the amount of fuel that was needed per unit of pig iron was greatly reduced, and the cost of producing it also dropped.

The next contributor to the evolution of iron casting is James Nasmyth, whose inventions not only increased operational economy, but more importantly, worker safety. However, we’ll let him tell you his story himself. The following is an excerpt from Nasmyth’s autobiography.

“I must here say a few words as to my Screw Safety Ladle. I had observed the great danger occasioned to workmen by the method of emptying the molten iron into the casting moulds. The white-hot fluid was run from the melting furnace into a large ladle with one or two cross handles and levers, worked by a dozen or fifteen men. The ladle contained many tons of molten iron and was transferred by a crane to the moulds. To do this required the greatest caution and steadiness. If a stumble took place, and the ladle was in the slightest degree upset, there was a splash of hot metal on the floor, which, in the recoil, flew against the men's clothes, set them on fire, or occasioned frightful scalds and burns.”

“To prevent these accidents, I invented my Safety Foundry Ladle. I applied a screw wheel, keyed to the trunnion of the ladle, which was acted on by an endless screw attached to the sling of the ladle; and by this means one man could move the largest ladle on its axis, and pour out its molten contents with the most perfect ease and safety. Not only was all risk of accident thus removed, but the perfection of the casting was secured by the steady continuous flow of the white-hot metal into the mould. The nervous anxiety and confusion that usually attended the pouring of the metal required for the larger class of castings was thus entirely avoided.”

“At the same time, I introduced another improvement in connection with these foundry ladles which, although of minor importance, has in no small degree contributed to the perfection of large castings. This consisted in hanging "the skimmer" to the edge of the ladle, so as to keep back the scoriae (slag, waste metal, or impurities) that invariably float on the surface of the melted metal. This was formerly done by hand, and many accidents were the consequence. But now the clear flow of pure metal into the moulds was secured, while the scoriae were mechanically held back. All that the attendant has to do is to regulate the inclination of the Skimmer so as to keep its lower edge sufficiently under the surface of the outflowing metal.”

“These inventions were made in 1838. I might have patented them but preferred to make them over to the public. I sent drawings and descriptions of the Safety Foundry Ladle to all the principal founders both at home and abroad, and I was soon after much gratified by their cordial expression of its practical value. The ladle is now universally adopted. The Society of Arts of Scotland, to whom I sent drawings and descriptions, did me the honour to present me with their large silver medal in acknowledgment of the invention.”

Nasmyth and Lawton seem to have a lot in common!

The birth of the steel industry

One of the most remarkable things about the iron casting industry is that it gave birth to the steel industry. One of the earliest forms of steel ever created was known as blister steel. It was produced in Germany and England in the 17th century through a process called cementation. In this process, charcoal and wrought iron were placed in a stone box and heated so that the iron could absorb carbon from the charcoal. Through repeated heating, the carbon content of the iron would increase and disperse evenly throughout the iron. Once cooled, the result was blister steel, which was more workable than pig iron due to its higher carbon content.

In the 1740s an English clockmaker names Benjamin Huntsman discovered that metal could be melted in a clay crucible and then refined, eliminating the waste metal that was left behind in the cementation process. His discovery came about during his attempts to develop higher-quality steel for his clock springs. He was successful in his attempts and created what is known as cast steel.

However, in the case of both cast steel and blister steel, the cost of production was a large limiting factor. Here’s how our next innovators overcame this obstacle: In 1851, Sir Henry Bessemer and Willian Kelly began developing simple converters that used blasts of air to burn out the impurities and excess carbon in pig iron.

Though Kelly was the first one to successfully utilize the converter, Bessemer was quick to obtain a patent for this invention, calling it The Bessemer Process. Some believe there was a degree of deception involved with Bessemer’s ownership of this process, claiming that Bessemer took Kelly’s work, enhanced it and patented it.

Those who believed Bessemer acted unethically cited the following facts: Kelly was successful in using this process before Bessemer. In addition, Kelly lacked the financial resources needed to perfect the process for commercial use. Finally, Kelly was able to prove patent priority in 1857. Whatever the truth may be, this process is still known throughout the industry by the Bessemer name.

The Bessemer process holds great importance because it was the first inexpensive process developed to manufacture steel out of molten pig iron, prior to the advent of the open hearth furnace.

The Bessemer process was carried out by heating iron in a pear-shaped receptacle, the converter, as oxygen passed through the molten metal in order to release carbon dioxide. This increased the iron’s purity.

The process was fast and inexpensive, removing carbon and silicon from iron in a matter of minutes, but it removed too much carbon and left behind too much oxygen. Despite this, The Bessemer Process was a huge stepping stone. It led to industrialization around the world, and better living conditions as the use of steel was introduced into construction. It also advanced transportation as iron rails were replaced by more durable steel.

Refinements to the Bessemer process

In the late 1850s, British metallurgist Robert Mushet found the solution to Bessemer’s problem. Spiegeleisen is a compound composed of iron, carbon and manganese. The manganese removes oxygen from molten iron, while contributing carbon to it, thus solving the imbalance created by the early Bessemer process.

The problem that remained was removing phosphorus, an impurity that made steel brittle. In 1876, Welshman Sidney Gilchrist Thomas came up with the solution by adding limestone to the Bessemer process. The limestone separated the phosphorus from the usable iron, and the phosphorus was left behind with the slag in the furnace.

For the first time, iron ore from anywhere in the world could be used to make steel. As a result, prices for steel dropped more than 80% between 1867 and 1884. Also, because of iron casting, the steel industry continued to advance.

In 1879, The C.A. Lawton Co., then named The Novelty Manufacturing Company, was founded by C. A. Lawton and his uncle. Before the end of their first year in business, it had already developed an invention that would revolutionize flour making.

Seven years later, the budding company nearly shut its doors when the Jones Bank of De Pere went bankrupt. However, at the very last minute, the company was saved. Over the next 130 years, this little company developed innovations that brought electricity to rural farming areas, overcame the Great Depression, and integrated Lean into the business - even though they were told it couldn’t be done. To learn more about Lawton’s incredible history, check out our other articles on Lawton’s five-generation history.

Ductile iron was developed by Keith Millis in 1943 and was awarded the patent on a cast ferrous alloy for ductile iron production via magnesium treatment in 1949. Ductile iron is produced from prolonged heat treatment and is used to manufacture gears, dies and many other machine parts.

Austempered Ductile Iron (ADI) was created in the 1950s but was commercialized and achieved success some years later. ADI uses austenite in a process that allows the metallurgist to cast more complex shapes with more consistent quality at lower prices.

As you can see, the development of iron casting is based on a long history of innovation – just like the history of The C.A. Lawton Co. By highlighting some of the innovations in our industry’s long and varied history, our goal is to generate greater awareness about its vital role in our daily lives. Lawton is glad to be a part of it.

Stay tuned for more fascinating facts about the history and science of iron casting!

A PDF of slides demonstrating the history of metal casting, created by a professor a foundry technology class