How LEAN is making a “Foundry Family” possible 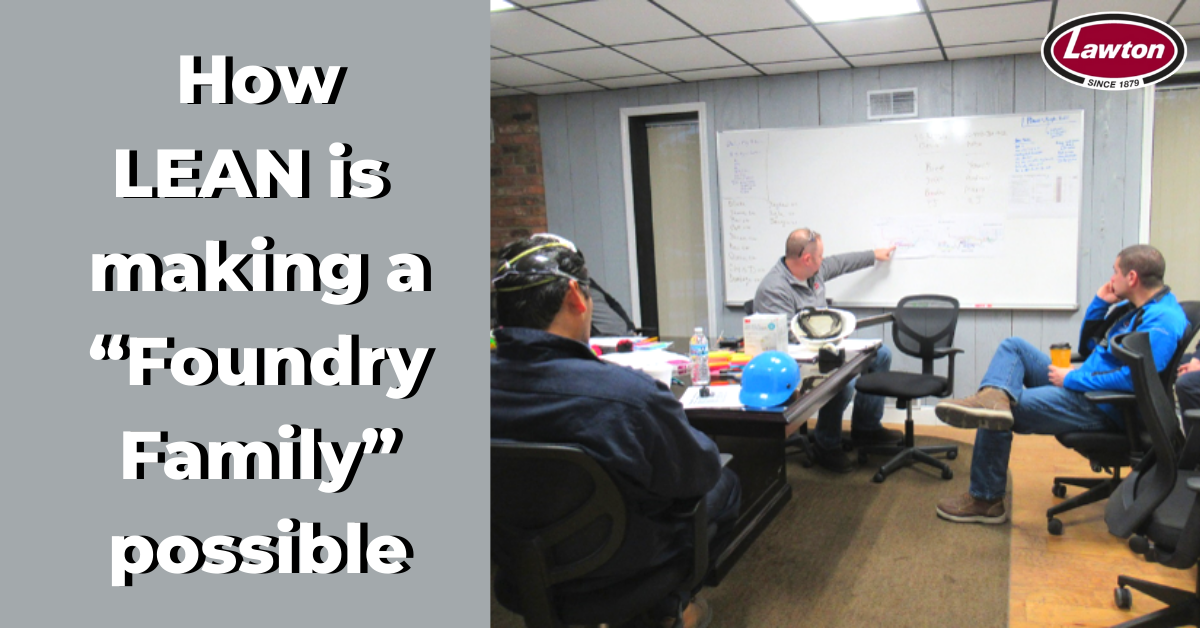 Often kids are raised by a single parent. To the best of their abilities, the parent does all he or she can assure their kids don’t see the struggles that are taking place.  I am an example of this because I was raised by a single mom. Even though I had a great childhood, my mom struggled to make ends meet. The only thing she wanted to do was make life better for both of us.

A few years later, my stepdad and his kids came along, and we initially did not connect. I thought, “What do we need this guy and his band of misfits around for, everything was going great before they showed up.” But, unbeknownst to me, it wasn’t.  At first, I didn’t talk to them, and he had many useless new rules I had to follow.

Time passed, and we eventually developed a bond that would last a lifetime and finally became a happy, fully functioning family.  It wasn’t always easy. We weathered many trials and tribulations but also shared success and happiness in the good times as a family.  My mom no longer had to struggle, and our lives were much better than we could have imagined.

Now I am currently employed by the CA Lawton Co., a great foundry in De Pere, WI.  It is a 140-year-old family-owned business that understands the value of their people and treats them like family.  Orders are flowing, we have an impressive backlog, the company is investing money back into the business, and everyone is happy. From the employees’ or kids’ point of view, life is grand, but just like me as a kid, we were wrong.  The company’s goals and objectives are no different from my mom’s above; they want to make life better for all of us.  To do so, they must keep growing the business and expanding to survive in the current market. Oakland Standard then came along with their family, Temperform, which is a successful, industry-leading, 30-year-old steel foundry in Novi, MI.  Temperform and Lawton could treat each other like stepsiblings and over the course of years and eventually develop a good working relationship.

Oakland Standard (the parents) need to start being successful within the next several months, not years.  How are two successful businesses with different cultures and a vast array of knowledge to work efficiently?

You might think there is no way to accomplish success quickly and efficiently, but we have a principle that many foundries have yet to employ, LEAN.

The LEAN tool chosen to initiate the relationship was a Kaizen event to create a value-stream map of Temperform’s complete process from start to finish. A Kaizen event is a short duration project with a specific aim for improvement.  They are typically a week-long event led by a facilitator with a team made up of members of the area in which the event is being conducted (leadmanufacturingtools.org).

A value-stream map (VSM) is a method for analyzing the current state and planning a series of events that take a product or service from the beginning of the specific process until it reaches the customer (Wikipedia).

How are two companies going to map the entire process with people they have never met in a week or less?  The answer is simple: structure, engagement, communication, and commitment.  The quicker you get the conversation started, the faster they will begin to build a relationship.

The fourth commitment is required by the upper-level management to allocate the group members’ time for a better part of a week to participate.  This can especially be a burden when key production employees are involved.  This shows Lawton and Temperfom’s commitment to building this relationship and implementing a cross-functional LEAN program into both facilities.

These events typically do not take more than a week, but in this case, we gave ourselves four days.  Our team consisted of two employees from C.A. Lawton, including myself, an area manager, and six employees from Temperfom.

These employees ranged from hourly employees to engineering and management personnel.  Due to the structured tools in the VSM, there was some introductory training needed for each step.  We then assembled into two teams to maximize efficiency. Each team was made up of employees with all types of skill sets.

Instead of trying to map the generic process, each team was given one specific part.  Each part in a foundry can go through different operations because it is not a one process fits all, even in the same foundry.  Leveraging the knowledge of the team from Temperform, we selected two completely different parts.

The part assigned to my team was released to production, and they had already produced over 8,000 parts. (This was casting only with no machining or outside operation required.)

The other team, which included my colleague from Lawton, was assigned a part that was still in the sampling stages and required heat treating and machining.

In the beginning, there was a little hesitancy by a few of the team members, but through persistence to drive engagement, they were all fully involved.  Within the first couple of hours, the employees were all talking and building relationships. Throughout the remaining steps of the process, each team member communicated effectively and was completely engaged in different tasks. Both of the companies were interacting and even got into detailed discussions when there were questions the group couldn’t answer.  If the collective group couldn’t answer the question or didn’t have a solution, we mobilized and found the person who could.

Not only was the event a success because of the accomplished goals, but the
stepfamily was effectively communicating with each other within four days, not weeks, months, or years.  Business cards were exchanged for future interaction, and everyone left knowing who the point of contact was for each job function. This speaks volumes for the effectiveness of Kaizen events and LEAN processes when trying to build these new business relationships. Just like any relationship, it takes time.  As each company, or stepfamily, has more of these cross-functional events, we will build a lasting, long-term relationship and a successful “foundry
family.”