Happy holidays around the world 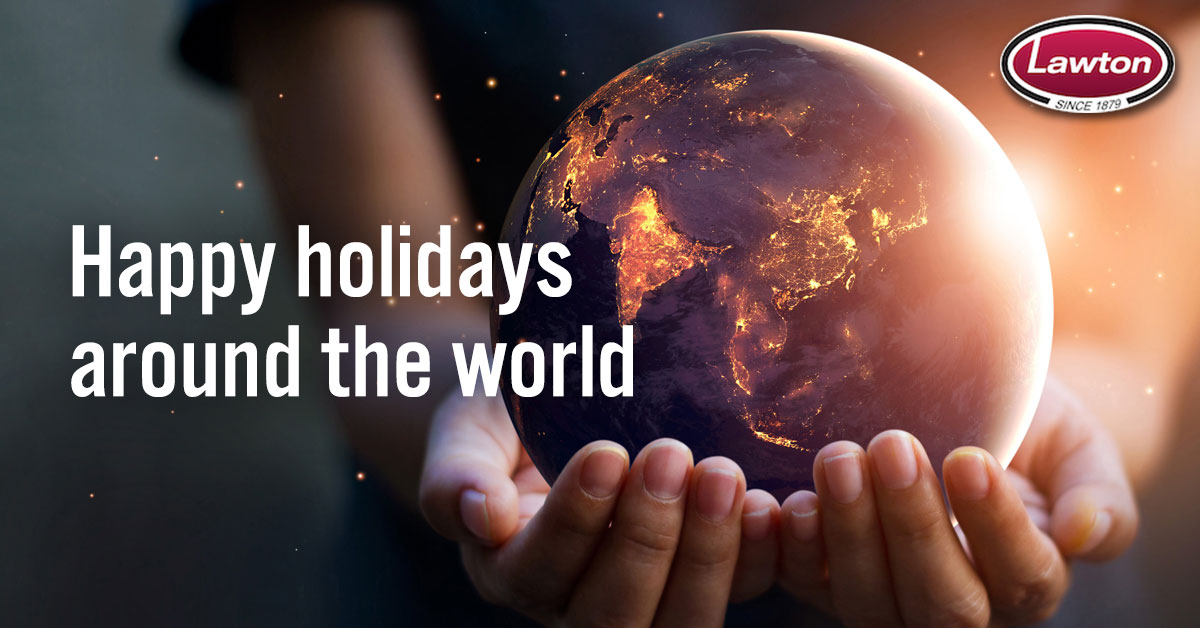 It’s that time of year again. Every store is filled with Christmas decorations, and songs about snow and sleighs are playing everywhere. For most of us, this time of year means Christmas trees, New Year’s resolutions that won’t stick, Santa Claus and Christmas movies.

However, Christmas and New Years are celebrated in many different ways around the world, and many people celebrate other holidays at this time of year. At the C.A. Lawton Co., we value diversity and inclusivity. So, this year we are looking at the myriad of amazing ways people around the world celebrate the holiday season.

One of the holidays we celebrate during this festive season is Kwanza. This holiday commemorates African heritage, and it is celebrated December 26- January 1. During Kwanza, people exchange gifts with loved ones, and light seven candles that are colored black, red, and green. Black symbolizes the people, red symbolizes their struggle, and green symbolizes hope for the future. The main goal of Kwanza is unity. Of course, there’s nothing more unifying than coming together with loved ones to celebrate the holidays.

Another holiday that is celebrated December 2-10 this year is Hanukkah. Known as the Jewish festival of lights, Hanukkah is celebrated for eight days by lighting a special candelabrum called a menorah.

This custom began when a miracle took place at the Holy Temple of Jerusalem. After the victory of the Maccabees over their Syrian oppressors, the temple needed to be rededicated. To do this, the Menorah had to be lit.

However, the Jewish high priest discovered that there was only enough oil to light the candles for one day. Despite this, the wicks of the Menorah remained lit for eight full days – a miracle. This is the reason why these candles, and other lights plays such an important part in the celebration of this holiday.

Another Hanukkah tradition is playing with a dreidel. This is a 4-sided spinning top that has a distinctive Hebrew letter on each side. In English, the letters stand for “A great miracle happened there.”

The Winter Solstice, which will occur on December 21st this year in the Northern Hemisphere, is the shortest day of the year. Although many people in the U.S. don’t celebrate it, other people commemorate it with festivals and celebrations. Long ago, people celebrated by lighting bonfires and candles to coax back the sun. They believed their rituals would bring back the light, and ensure the sun’s daily return.

In addition to these unique holidays, there are also many ways to celebrate Christmas. People in Iceland often exchange books on Christmas Eve, then spend the rest of the night reading them and eating chocolate.

On Christmas Eve in the Ukraine, people eat an enormous, 12-course supper. Each course is dedicated to, and representative of, one of Christ’s 12 apostles.

Norway is the birthplace of the Yule log. The ancient Norse used it in their celebration of the return of the sun at the winter solstice. “Yule” came from the Norse word hweol, meaning wheel. The Norse believed that the sun was a great wheel of fire that rolled towards, and then away from, the earth. Burning the Yule log not only provided warmth, but was part of their ritual to reassure that the warmth and light of the sun would return.

In France, the Yule log is known as the bûche de Noël, and is represented today by a cake shaped like a log that is covered in delicious chocolate.

For more than 300 years, Christmas in Scotland was banned by its parliament. It wasn’t until 1958 that it was made legal again. The real-life “Grinch Who Stole Christmas” was the 16th century Scottish minister, John Knox. Due to his beliefs that Christians should only celebrate holidays mentioned in the Bible, the celebration of Christmas was discouraged beginning in 1583, and then banned by law in 1640. Because of this, Scotland makes a much bigger deal of celebrating Hogmanay, or New Year’s Eve.

Moving on to the New Year’s holiday, there are many other countries that have fascinating traditions. In Denmark, it’s a ritual to save up unwanted glassware, and then smash it against the front doors of friends and loved ones. The glass smashing is meant to symbolize destroying the problems of the past year. It is also considered a compliment to have people smash glass on your door.

In China, the Chinese New Year is the most important of its traditional holidays. It falls on different dates each year, between January 21st and February 20th. People gather with friends and family to eat New Year’s Eve dinner, which is very large, and includes fish, noodles and dumplings. The holiday is traditionally a time to honor household and heavenly deities, as well as ancestors. The celebration ends on the 15th day with a beautiful lantern festival.

In Siberia, brave divers plant a New Year’s Tree underneath a frozen lake. The Siberian New Year Tree (or yolka) is similar to a Christmas tree. It represents the coming of Father Frost, and the act of planting it symbolizes starting over, rebirth and new growth. The jumping-into-a-frozen-lake challenge is just an added bit of entertainment for those celebrating the New Year.

In Spain, at the stroke of midnight, Spaniards stuff their mouths full of a dozen grapes. Each one symbolizes good luck in each month of the upcoming year. After the grapes are inhaled, the parties begin, and they last the rest of the night.

Although all of these celebrations are unique, they all have the same essence at heart: gathering with loved ones, celebrating the blessings of the past year, toasting the year ahead, and eating good food. So, whether you’re stuffing your face with grapes, building a stone monument to honor the sun, lighting some candles or placing presents under a tree this holiday season, make sure you’re surrounded by the people you love. Oh, and if your tree happens to be under water, make sure your presents are waterproof.