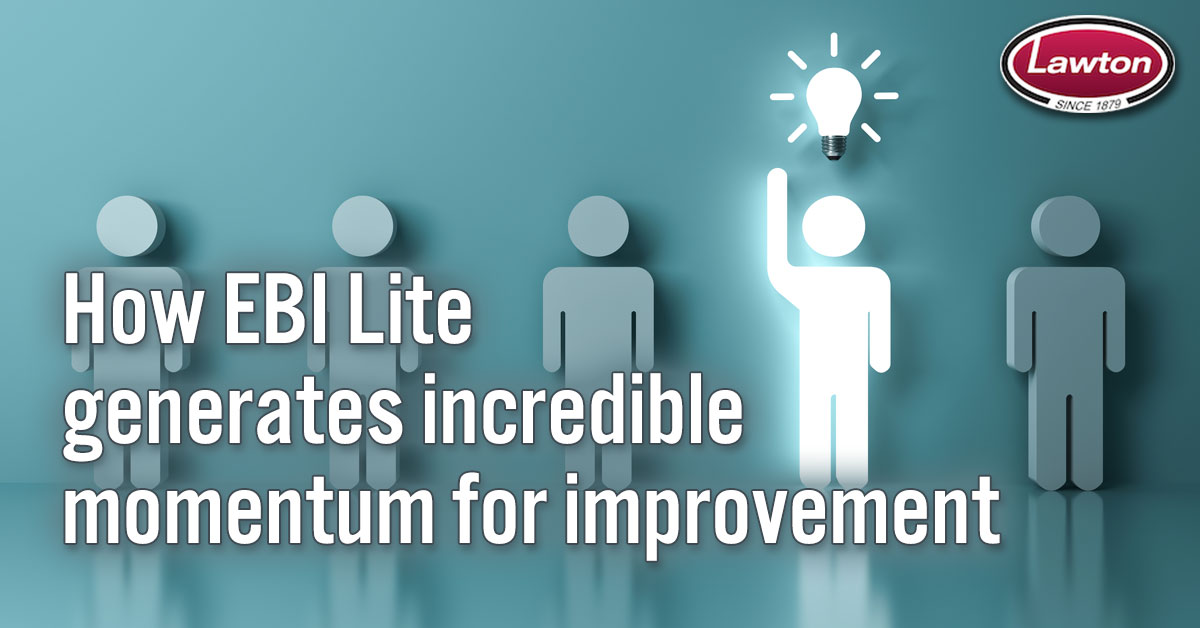 In 1898, only 19 years after The C.A. Lawton Co. was founded, George Eastman of Eastman Kodak created the first known corporate suggestion system. It was focused on saving the company money. Kodak employees responded by turning in good ideas for years to come, helping the company to thrive for many years.

The Japanese studied this practice closely. At the end of World War II, their industrial might was all but destroyed. They decided that the only way they could grow was to use Lean principles. Because of this, they put a lot of emphasis on continuous improvement, based on Kodak’s simple suggestion system – but with a few of their own unique twists.

The Japanese variant became known as quick and easy kaizen: small, incremental improvements to rebuild their manufacturing infrastructure, by harnessing the ideas of their people. People were one of the only resources they had at the time. They wanted everyone involved, and everyone empowered to bring about positive change. Anything that made the work easier, better, faster, or cheaper was encouraged. The result is that Japan became one of the world’s most highly respected manufacturing powerhouses during the second half of the 20th century.

120 years later, Lawton’s simple EBI Lite program carries on the tradition of quick and easy kaizen, empowering our workers to seek out and make incremental improvements to their work areas. According to Lawton chief operating officer Barry Adamski, EBI Lite may be the single most important path to a better future for the five-generation, family-owned foundry:

“We believe each person has unlimited creative potential to improve every aspect of the company,” he explains. “We give each of them the freedom to look at their work every day and ask themselves, ‘How can I make it easier, better or just more interesting?’ As soon as they identify simple improvements, they are empowered to make them. The compounding effect of this approach is enormous. By everybody improving a little bit every day, we can overcome great obstacles.”

The humble roots of EBI Lite

Employee Built Ideas – or EBIs – didn’t start out to be a game-changer for Lawton. Roughly a decade ago, it was a program that the company ran from time to time, focused on specific, short-term objectives.

“For example, the company would target something like cost savings. It would solicit ideas from employees, evaluate them and choose one to implement,” recalls president and CEO Alex Lawton. “The person or team who submitted the winning idea would get a reward or recognition and the idea would become a project. Progress and outcomes were measured and communicated to all.”

But there were two limitations to this early employee idea program: It wasn’t continuous, and it didn’t empower employees to make small improvements to their work areas on their own. Today, if it costs $50 or less and can be implemented in two hours or less per week, they can do so.

“Anything that makes your job safer, easier, better or faster is fair game,” Adamski points out. “Sometimes, it’s focused on making your job suck less. We spend a large portion of our waking hours at work. No matter how enlightened and efficient the management team is, it IS still a job, with all the good and bad things that come with that. Imagine a place that opens the door to simple creative ideas to remove the suck from the job, a little bit, by everybody, every day. That’s very empowering!”

But that means Lawton must take great care to hire people who are comfortable using both their hands and their minds at work. “Eighty percent of the people in the world today would not be a fit here at Lawton. We are fast-paced yet easygoing – if you’re dedicated to getting your work done. We need your hands to do the work, but we also want people who are willing to bring their best thinking to improve that work. We are easy on the people but relentless on improving our processes,” he emphasizes.

The important role of supervisors

Lawton expects all its employees to participate in the EBI Lite program, but supervisors have a special role: It’s their responsibility to help those workers who have difficulty participating. The supervisor encourages, challenges, suggests and teaches the employee how to implement their ideas.

Adamski says Lawton’s continuous improvement program helps its employees feel good about change, not threatened by it. “Everyone participates and has a stake in the company’s long-term success. That cultivates unbelievable engagement from our people,” he points out.

During his long career in manufacturing, Adamski has watched U.S. companies move hundreds of thousands of engineering and manufacturing jobs to other countries to cut costs. “By focusing on these incremental improvements in our operations and fostering a keen hatred of waste, I’m convinced we can level the playing field and compete with any foundry around the world,” he emphasizes.

When it comes to competing with domestic foundries and machine shops, Adamski believes the compounding effect of quick and easy kaizen gives Lawton an unassailable advantage. “If our competitors aren’t constantly improving and harnessing the power of each of their workers, I don’t think they will be able to keep up with us.”

Adamski reports that, as a company, Lawton implemented 3,059 EBI Lite ideas from approximately 125 employees during its 2018 fiscal year, which just ended in April.

“In two years, we hope to hit 6,000 per year. Other foundries that aren’t listening to their employees as much, that aren’t empowering them to improve every day and every week, won’t be able to match our momentum,” he confidently declares.

The formula for success, he insists, is simple: “Keep the ideas coming for making your job easier, better, faster or more interesting. You’ll enjoy your work more, you’ll be contributing to transforming our workplace and you’ll be helping to ensure Lawton’s continued growth for many years to come!”